Aage is serving time for refusing to serve French and German customers! 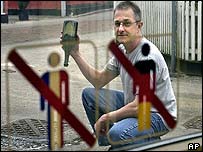 Aage Bjerre is serving an 8 Day sentence for not serving French or Germans in his restaurant after their countries did not back the US in the War in Iraq!

A Danish pizzeria owner has gone to jail for refusing to pay a fine imposed after he barred German and French customers from his restaurant.

Aage Bjerre acted in protest against the French and German governments’ opposition to the US-led war in Iraq.

He will now serve an eight-day sentence at a minimum security prison, the Associated Press reports.

In June 2003 a Danish court convicted of him of racial discrimination.

And, for those of you who may have missed it… Mr Bjerre is not the only man in Denmark who loves the US. There’s plenty more of them in THIS VIDEO here of Danes singing and rallying in Denmark during President Bush’s stop over last week on his way to the G8 Meetings.

(Oh,… this Pro-US Rally did not make the AP rounds!)

Update: So, do you suppose this restaurant owner will be arrested as well?

And… the UN is pushing Japan to pass a national law against disrimination.

Update 2: Dirty Harry has started a Blog-a-thon for Mr. Bjerre. You can see how to help out this Danish friend with his legal expenses by checking out his post at GOP VIxen. Whet to go, Harry!