George Bush the Prophet? When peace activists in Pakistan start pushing the “Bush Doctrine” it makes you wonder?

(Lahore, Pakistan) Noted religious and political figures gathered to call for fostering unity, patience and harmony between the West and Islam. They were addressing a seminar on “A Critical moment, inter-religious dialogue” held here (Lahore) Sunday under the aegis of Muslim-Christian Federation International. Secretary General, Pakistan Peoples Party Parliamentarian, Jehangir Badar on the occasion said that:

and added that the terrorism was spreading due to misunderstanding among religions.

Charles Krauthammer has more on the Bush Doctrine today as well, and why it works. (He also points out the “fat internationalist elephant in the living room” during the Clinton years.)

Faith in democracy in Islamic countries is also on the rise.

Even the Germans are enthused about the democratic transformation of the Middle East and elsewhere.

And, after the London attacks, the global anti-terrorism voices have possibly gained in numbers and strength. There have been several peace rallies held by interfaith groups. One group calling itself the Muslim Christian Federation International held a rally against terror in Lahore, Pakistan this week. 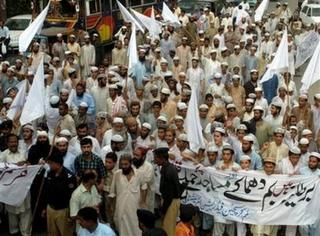 A group calling itself the “Muslim Christian Federation International” rallied in Lahore, Pakistan to condemn recent suicide bombings in London, Wednesday, July 20, 2005. The sign at the bottom reads, “We condemn London bombings!” (AP)

General Secretary Joseph Francis, a Christian Rights Leader in Pakistan, has been fighting for Pakistan’s Christian minority since the 1960’s. 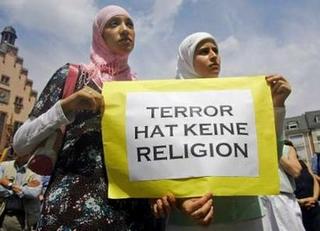 The picture at the right is of an interfaith rally in Germany against terror. (Reuters)

Muslim leaders have planned an anti-terror summit in Australia aimed at heading off extremist elements of the Islamic faith in Australia.

CHRISTIAN, Muslim and Jewish leaders have launched a joint appeal for the withdrawal of hate literature from bookstores and an apology from the booksellers.

A statement by the Australian National Dialogue of Christians, Muslims and Jews has been released in response to the sale of racist and vilifying books at Islamic bookshops in Sydney and Melbourne.

“All fair-minded people will be dismayed to learn that notorious racist and vilifying texts, printed overseas, have found their way to Australia and have been made available for sale at bookshoppatronizeded by customers seeking knowledge of Islam and Muslim life,” the statement said.

“The individuals who have imported and are promoting this material must not be allowed to present themselves as acting in the interests of Muslim Australians.

Although after the London bombings some Westerners still believe that terror is our fault, it was nice to see these other developments!

Update: (Thursday AM) Glenn Reynolds, the Instapundit is also shining some light on these global interfaith protests.