** ETHIOPIAN RALLY AT THE STATE DEPARTMENT, VIDEO HERE **
If I ever have a rally I am inviting this group, here!… They have the American & Ethiopian Flags waving, the loud speakers, the large crowd, the synchronized chanting, and the excitement.
They know how to R-A-L-L-Y!! 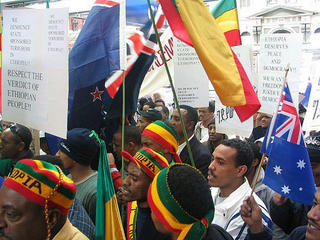 The picture on the left is from a protest in Aukland, New Zealand on June 28th.

The results for the May 15th Ethiopian elections will be delayed again until investigations into allegations of electoral fraud are completed. The election results were already delayed from June 8th until July 8th.

NEB officials had previously postponed declaring the final results of the poll from 8 June to 8 July, saying they needed time to investigate disputed results.

“There was a delay and that delay is continuing and we expect it will be another two or three weeks before we know who the winner is,” Kemal Bedri, the chairman of the NEB, said.

Kemal said the NEB would only release results from 250 to 300 constituencies, which he said would show who was leading but would not show the overall winner of the election.

Trust has broken down between the political parties. Ethiopia had its first democratic elections on May 15th. But, violence broke out soon afterward and 36 protesters were killed and thousands were arrested.

Initial results say Prime Minister Meles Zenawi’s ruling party has retained its majority but these have been rejected by the opposition.

Opposition parties say many of their members are still in prison.

An impassioned rally was held in Australia today.

About 100 people, including many of the small Hobart population of Australian Ethiopians, called for peace in the troubled African country.

Since the May general election reports describe people being killed or imprisoned for protesting the political leadership and its re-election.

The rally on Hobart’s Parliament lawns heard of the effects on the Ethiopian family and friends of local people, most of whom spent decades in refugee camps in Sudan.

The EU Parliament on Thursday condemned the Mugabe Regime and Ethiopian violence.

So, the Countdown continues…

Robert Mayer at Publius Pundit is on the story. Robert has a link to information on a protest today at CNN in Atlanta.

The above video clip is from ECTV from a June Rally in Washington, DC at the State Department.

There is much more news at Ethiopian Review.

Update: (Friday AM) Officials have released partial results to the disputed May Election on Friday. President Meles’ Ethiopian People’s Revolutionary Democratic Front (EPRDF) took 139 out of 307 seats counted so far. This does not give him a clear majority. The opposition Coalition took 93 seats.

HERE is a breakdown of the results.