Egyptians and Tourists Join in Protest at Sharm el-Sheik 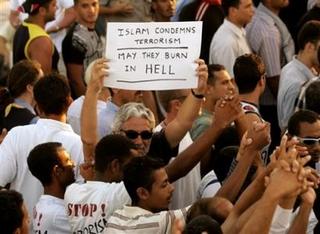 A rapid series of explosions killed 88 people in this Egyptian Red Sea resort on Saturday, devastating a mall, a luxury hotel and a coffee shop. (AP)

VIDEO OF THE “ACTUAL” SHARM EL-SHEIK BLAST AND AFTERMATH, HERE 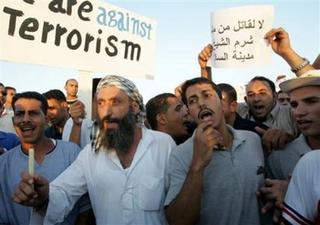 The Mideast Press came out and condemned the terrorist bombings on Saturday:

“We are the victims – regardless of whether the people killed are Arab, Muslim or Western Christian, or whether they are living with us in our country or we with them in their countries.” said the Kuwaiti paper. 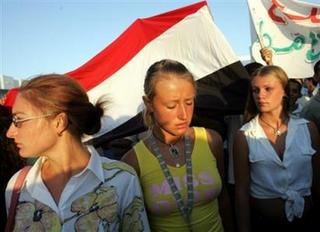 Egyptians are holding over 70 individuals for questioning about the largest terrorist attack in Egyptian history:

More than 70 people have been detained in Sharm el-Sheik and elsewhere on the Sinai Peninsula (search) for questioning over the bombings early Saturday. But none has been accused of involvement in Egypt’s deadliest-ever terror attack, said security officials, who declined to be identified because of the sensitivity of the inquiry.

Update: Instapundit has been tracking another Egyptian protest organized by blogger Karim Elsahy.
Rantings of a Sandmonkey has a great post on the Cairo protest.

Jim Hoft
Jim Hoft is the founder and editor of The Gateway Pundit, one of the top conservative news outlets in America. Jim was awarded the Reed Irvine Accuracy in Media Award in 2013 and is the proud recipient of the Breitbart Award for Excellence in Online Journalism from the Americans for Prosperity Foundation in May 2016.
Two Days After Inauguration Walmart Announces They Will Expand Offering COVID Vaccinations in US Stores
President Trump Gives Permission for US Troops to Stay at Trump Hotel in Washington DC
For “Open Borders” and Censorship of “Hate Speech” - The EU funded Open Society NGOs with over $35 Million 2019
The Same Party that Stole Military Votes in Michigan and Georgia -- Is Now Forcing Military Men and Women to Sleep on the Floor in a DC Parking Garage
They Don't Want the Truth to Come Out: Senate Democrats File Ethics Complaint Against Senators Cruz and Hawley for Challenging Election Fraud
See more...