1065 Crosses were removed from the famous Checkpoint Charlie Monument. 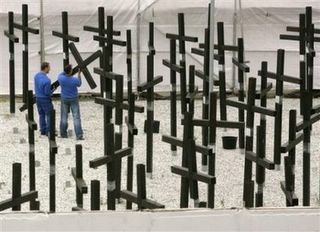 Crews began removing the 1065 crosses at the Checkpoint Charlie Monument in Berlin earlier today. Each Cross represents one of the 1,065 who lost their life while trying to escape from East Berlin to the West.

A demolition crew began taking apart a memorial at Checkpoint Charlie, one of Berlin’s most visited tourist sites, after the bank that owns the land sued to remove the field of black crosses commemorating each of those who died trying to escape East Germany.

Working in yellow waterproof coats to ward off pouring rain, the crew took down the 1,065 crosses and removed, chunk by chunk, the part of the Berlin Wall that had been rebuilt at the site.

The owner of the site, BAG Bankaktiengesellschaft Hamm, says that the memorial is illegal and is preventing the bank from selling the land. Alexandra Hildebrandt, widow of the founder of the privately owned Wall Museum at Checkpoint Charlie and the manager of the memorial, campaigned to keep it, supported by Berlin’s opposition Christian Democrats and groups of victims of the former East German government. 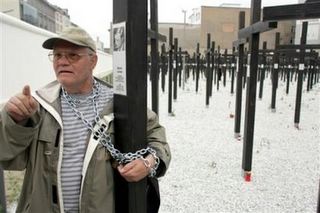 German Uwe Reschke, who as an East German spent six years in jail for attempting to flee to the West, chains himself to the monoument ordered to be taken down by Berlin Authorities.

Checkpoint Charlie was erected by U.S. forces in 1961 as a crossing point for foreigners to the Soviet-controlled east. In October that year, it was where Soviet and U.S. tanks, fully loaded and with orders to return any fire, faced off at a distance of about 100 yards for several hours.

Berlin’s city government, comprising Chancellor Gerhard Schroeder’s Social Democrats and the Party of Democratic Socialism, successor to the East German Communists, backed the decision to demolish the memorial, arguing that Checkpoint Charlie is the wrong place to honor victims of the East German regime. 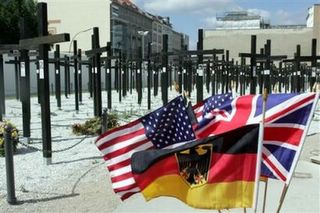 German, British and American Flags fly together at the Checkpoint Charlie Monument representing an earlier time in the Allies history.

Protesters accused the Berlin Authorities of Social Democrats and Former Communists of not wanting to acknowledge the crimes of the former East German State:

In driving rain, workers in blue overalls and yellow plastic coats tore down the huge concrete wall segments and unscrewed the large wooden crosses that each bear the name of a victim.

Some former political prisoners even chained themselves to crosses – but were removed by police.

But the supporters said Checkpoint Charlie needed a monument to commemorate the wall and its bloody history.

They also accuse the Berlin authorities – a coalition of Social Democrats and the former Communist PDS party – of not wishing to acknowledge the crimes of the East German state.

Davids Medienkritik has been leading the blogosphere with this story.

Here is an earlier post… actually from late last night as I was looking to see if the authorities would go through with the demolition. They did…

Update: Instapundit is linking here to this story. GOPinion is also running this story from Davids Medienkritik with email addresses of who to contact to voice your opposition.