On Friday doctors in Venezuela rallied in Caracas yelling “Out!” to Chavez and the Cuban doctors he has brought into the country. Now, on Tuesday, students marched in Caracas demanding autonomy of the universities from government influence. 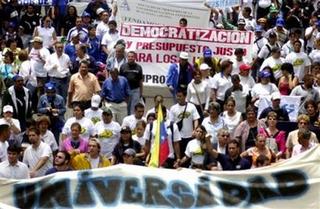 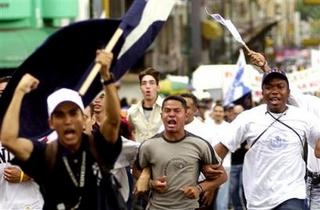 Cardinal Rosalio Castillo Lara from Venezuela recently spoke out against Chavez and is not backing down:

Venezuela’s Catholic Cardinal Rosalio Castillo Lara recently spoke out against his country’s president, Hugo Chávez, and his policies. The president has reacted to the prelate’s comments with anger and insults, calling the Cardinal immoral, an outlaw, a hypocrite and a coupist, among other things.

This is typical of Chavez, Castillo says. “This is a tactic of his which he is used to. He has never worried about facing his critics by reasoning …. On the contrary, his answer is to attack his critics, try to destroy them, disqualify them, insult them, any number of things.”

Castillo added, “His preoccupation and actions since he arrived have been to annihilate, destroy the opposition, in other words, to do away with it. Then he says hypocritically that he loves the opposition, that there is no opposition.”

The picture of the student on the left is from Aleksander Boyd’s Blog.

“No Doctors for Oil!”

Several hundred Venezuelan doctors and hospital workers staged a protest on Friday against the presence of thousands of Cuban doctors employed by the government whom they said were stealing their jobs.

They complained that many Venezuelan doctors could not find jobs and that while Chavez’s government equipped Cuban-staffed clinics with medicines and modern machines, public hospitals lacked basic medical equipment.

Blogger V-Crisis has a letter from Pope John Paul II written to Cardinal Castillo posted. It appears that the Cardinal was a close acquaintance to John Paul II.

A.M. Mora y Leon from Publius Pundit has also been following the Chavez saga closely.
Today A.M. Mora y Leon has a post up on “How Cuba’s doctors really live in Venezuela”.
A.M. says he has never seen a better essay on the topic and he would know!

More on the doctor’s protest and a couple of other protests in Cuba HERE!

Update: (Wednesday AM) Instapundit is linking to this Anti-Chavez news this morning.

Meanwhile… Chavez is out promoting what he calls his “21st Century Socialism”.

…I call it the furthest distance from capitalism to capitalism!

Babalu’ Blog has been talking about Castro’s new best friend in “Cubazuela”.

And,… The Bad Hair Blog has much, much more on “Cubazuela”.