The days may be numbered for President Gloria Arroyo. 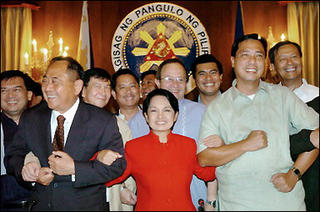 President Gloria Arroyo is losing friends fast and is holding on to the ones she has for dear life!

A defiant Philippines President Gloria Arroyo has vowed to remain in office as key allies and senior aides abandoned her, joining business leaders in calling for her resignation over alleged vote-rigging.

Arroyo, a US-educated economist, dug her heels in on Friday, naming new finance, budget, trade, education, social welfare and agrarian reform ministers. She did not replace two presidential advisers of cabinet rank who also quit Friday.
“With all due respect to former president Aquino and others, I say that their actions cause deep and grievous harm to the nation because they undermine our democratic principles and the very foundation of our constitution,” Arroyo said.

She said that as president, she was sworn to “defend our hard-won democracy at all costs”.

The political crisis erupted early last month after audio tapes surfaced in which Arroyo was purportedly heard plotting to fix a million-vote victory against movie icon Fernando Poe in the May 2004 presidential election.

Arroyo apologized late last month for improperly telephoning an election official during the vote count but denied cheating. She is facing impeachment charges over the allegations. 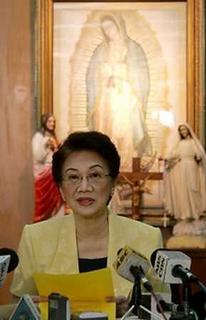 Former Philippine President Corazon Aquino with Madonna in the background reads a statement during a news conference in Manila July 8, 2005. Aquino also called for President Arroyo to make the “Supreme Sacrifice” and step down.

Arroyo is an devout Catholic and believes she has God’s mandate to lead this predominantly Catholic nation of 84 million people. She has often said God had called her to be president, says she is being “demonized as the bad guy.”

“This is unfair, but it is a cross that God in his wisdom has given me to bear, so I will bear it. I have never questioned God’s way before, and I will not do so now,” Arroyo said late Thursday.

Ex-Cabinet members criticized Arroyo for making the situation more vulnerable to extremists and for hurting the economy:

The eight senior cabinet members who quit, including Finance Secretary Cesar Purisima and Budget Secretary Emilia Boncodin, criticized Ms Arroyo for giving priority to “her determination to survive as president” over the interests of 84 million Filipinos.

“The longer the president stays in office under a cloud of doubt and mistrust … the greater the damage on the economy and the more vulnerable the fragile political situation becomes to extremists seeking to undermine our democracy,” Mr Purisima said, reading out a statement on behalf of the eight.

The head of the Philippine armed forces, General Efren Abu, ordered soldiers to stay out of the crisis amid reports of coup plots. 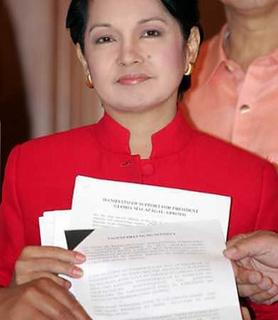 The US said it would not support an un-democratic transition of power.

Stocks were up on Friday with the news of resignations:

FINANCIAL markets firmed up Friday on fresh hopes that the resignation of highly regarded government officials led by Finance Secretary Cesar Purisima may speed up the resolution of the political crisis hounding President Gloria Macapagal-Arroyo.

Michelle Malkin has been following the story HERE and adds:

Reuters says the Catholic Bishops Conference of the Philippines is meeting this weekend. If the Bishops call on Arroyo to resign, she’ll probably be out by the end of the weekend.

One question for the U.S. is whether Arroyo’s successor will be any better on the War on Terror. Despite paying lip service to combating the Islamist threat on the islands, Arroyo capitulated during her tenure. And the world has suffered for it.

Publius Pundit has been following the story.

John Marzan at Philippine Politics 04 is on top of this story.

Update 2: It looks like the Catholic Bishops are giving President Arroyo a pass… for now…