The countdown has begun for Ethiopia. Time is ticking away as the first democratic election results are due to be released in six days on July 8th.
A large rally is planned this week at Atlanta’s Carter Center and CNN Headquarters.
There are other rallies planned to spread awareness of the critical situation in Ethiopia. 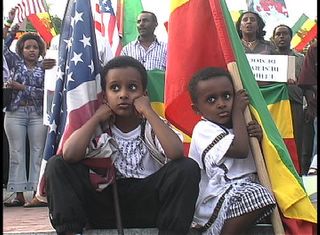 Two protesters in front of the US State Department in Washington show concern and hope for the future of Ethiopia.

We are praying hard that whatever happens on July 8, that God will protect Ethiopia from any more bloodshed. We have been Christians since the 4th Century, and even through wars and jihads, we have sustained the Ethiopian Orthodox Chuch….

More than politics, we suppose, we need prayer right now that once and for all, Ethiopia will stretch her hands to God.

In the last part of June, government officials pledged to look into vote fraud allegations but only into 146 of the 436 complaints:

But the Ethiopian Election Board said its review panel would only investigate alleged irregularities in 136 of the 299 constituencies where opposition parties are complaining of fraud by Prime Minister Meles Zenawi’s government.

Meles, feted by Western leaders and once hailed by U.S. President Bill Clinton as part of “a new generation” of African leaders, is under pressure to demonstrate transparency. 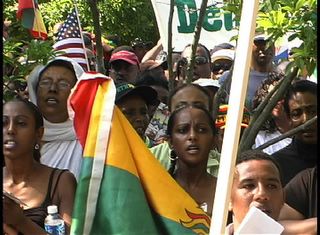 Ethiopians rally in front of the US State Department in Washington DC.

The EU, however, has concerns about the vote counting.

Three lions rescuing a 12-year-old girl kidnapped by men who wanted to force her into marriage got more press coverage than the government of Ethiopia hijacking elections and putting 71 million people in peril.

90% of Ethiopians eligible to vote turned out to have their voices heard in the May election. The news turned to be not so good for the ruling party who lost every single major city in Ethiopia and was swept from all 23 seats in the capital, Addis Ababa. When the president saw the tide turning against his party even in the countryside (an assumed ruling party stronghold where the government is the sole owner of all land and distributor of fertilizer), the Prime Minister banned all demonstrations. He had said earlier that no color revolution will happen in Ethiopia, referring to the Ukraine. He then started to harass the opposition, even going as far as putting the opposition’s top leaders under house arrest. (No word yet on any poisoning.)

Just like the leaders of Ukraine did, the Revolutionary Party stepped up the harassment and claimed victory against all statistical odds. 36 people died as this government touted as progressive by the west fired live ammunition into protesting crowds.

We are asking President Bush to afford the same opportunity to Ethiopians as he did to Ukrainians. Our president sent a strong letter to Mr. Kuchma of the Ukraine stating,

“You play a central role in ensuring that Ukraine’s election is democratic and free of fraud and manipulation. A tarnished election, however, will lead us to review our relations with Ukraine.”

The world rallied around the Ukraine- over 2000 observers were sent, and there was a revote.

That is all we want in Ethiopia. 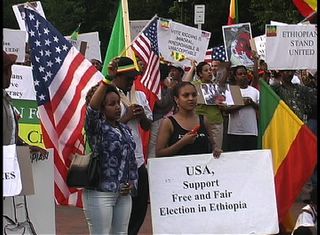 Ethiopians held a candlelight rally at a White House protest in June.

Congress has started the process in a letter sent to Prime Minister Meles Zenawi:

“State-sponsored violence against peaceful, if enthusiastic, demonstrators must be considered unacceptable in a civilized nation such as Ethiopia”

The only way it can turn out okay is:

a) God intervenes
b) the US says “enough!”

Here is one thing you can do to help…
Please sign this petition to President Bush. It is a very respectful request asking the US to intervene. 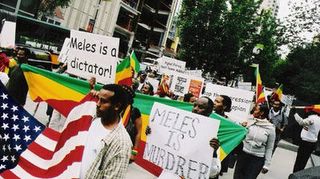 Protesters attend a march in Seattle on Friday, July, 1.

** Rallies are planned in several cities in the US and worldwide on July 7th and 8th. **

Here is a list of cities that have had protests since the election. Check HERE to see if there is another rally scheduled in the particular city this week:

The rally in Atlanta will be at the Carter Center on July 7th and the Martin Luther King Jr. Center on the 8th where protesters will march to CNN Headquarters.

For more information on each of the rallies go to Ethiopian Review.

Ethiopia… The story is not over yet!

Robert Mayer at Publius Pundit is also reporting on the rally at CNN Headquarters in Atlanta this week.

Update: (July 3rd) Glenn Reynolds, the Instapundit, is running this news and other news from Africa.

Also, today, the AP is pointing out that “surprisingly”, President Bush seems to have a fixation with geting the troubled continent on the right track.