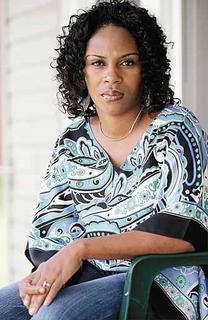 Sheila Thomas is the first of five convicted defendants of vote fraud in East St. Louis to make a public statement since the guilty verdict last month:

Sheila Thomas said she is innocent, but added that if her vote fraud convictions were justified, then high-ranking county Democrats should also have faced a jury.

Thomas is the first of five defendants convicted of vote fraud in federal court last month to make a public statement after the verdict.

“We got into this because they gave us money,” Thomas, 31, said about $73,000 passed out in East St. Louis two days before the Nov. 2 election. St. Clair County Democratic Central Committee Chairman Robert Sprague distributed the funds by giving checks to city Democratic precinct committeemen.

“If we never would have got money, we probably would have never got into this,” Thomas said.

Thomas also said she does not know whether county Democratic officials knew the money might be used to pay for votes.

“Bob Sprague is the one who gave us our checks. He gave us the money. He, too, should have been tried…. We all should have been sitting at the same (defense) table. All of us. All the (East St. Louis) precinct committeemen. All the guys in Belleville. Not just the five of us because that wasn’t fair,” she said.

Thomas said she felt that other county Democratic officials should have been charged but wasn’t sure who.