And, she’s already off making tracks in the Mideast today!

SEVERAL HUNDRED PROTESTERS WERE ARRESTED ON THURSDAY BEFORE RICE WAS DUE IN ISRAEL THIS WEEKEND,
VIDEO HERE 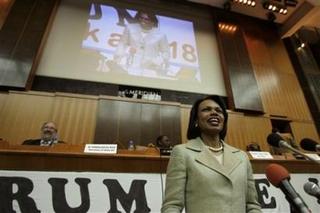 On Wednesday, Condoleezza promoted the African Growth and Opportunity Act with her moving speech in Senegal:

Before I begin I want to acknowledge something that the Foreign Minister has said. I was here just about two years ago in Senegal with President Bush and we went to Gorée Island to the site of the transatlantic slavery. And as we stood at the gate that I think one could call a gate of no return, we all thought about the extraordinary bonds of kinship, of blood, of tragedy between the United States and Africa.

In my own personal case, of course, many of my ancestors may have come through that gate. And it is only in the course of the last several years that the United States has fully begun to come to terms with that great tragedy. It has become — we managed to come to terms through institutions of democracy and inclusion. But I personally want to acknowledge my gratefulness to the sons and daughters of Africa, without whom there quite literally would have been no United States of America…

…With President Bush’s leadership, America has tripled our development assistance to Africa. And we will double it again by 2010…

…Not only is America giving new money, we are revolutionizing how much of that money is given, together with Africans who believe in good governance, democracy, and an open society.

Under the leadership of Paul Applegarth, who is here today, our Millennium Challenge Account Initiative is providing new development grants to nations that govern justly, promote economic freedom, and invest in their people. So far, eight African countries have qualified to apply for grants, including Senegal, and one, Madagascar, has already signed a development compact worth $110 million.

Condoleezza demanded a resolution to the Darfur Crisis Thursday 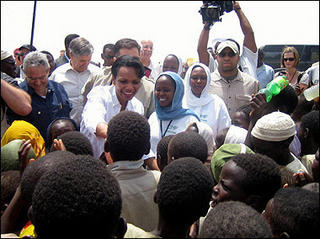 Condoleezza held talks with Sudanese officials and visited Darfur during her stop in the troubled Saharan country:

In her first trip to the sprawling African country, Rice had a round of talks with Khartoum leaders, demanded and got an apology for a dustup between her entourage and Sudanese security men, and visited battered Darfur.

US officials said Rice made clear Washington would not improve ties with Sudan without a resolution of the crisis in Darfur, where up to 300,000 people have died in 29 months of fighting branded by Washington as genocide.

“I told them they had a credibility issue,” Rice said of her talks with President Omar al-Beshir, Vice President John Garang and Foreign Minister Mustafa Osman Ismail.

Condi gets her apology:

Sudanese Foreign Minister Mustafa Osman Ismail apologized to US Secretary of State Condoleezza Rice over the treatement of her delegation and the press corps as she visited Sudanese President Omar al-Beshir’s residence.

* POLITICAL TEEN HAS THE VIDEO OF ANDREA MITCHELL’S EPISODE WITH SUDANESE BODYGUARDS. *

Friday included a stop in Israel 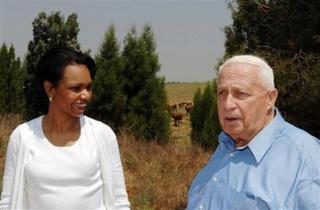 Condoleezza met with Ariel Sharon at his ranch before formal meetings tomorrow. (AP)

Ms. Rice met with Israeli Prime Minister Ariel Sharon at his ranch in southern Israel Friday. She has been urging greater coordination between Israel and the Palestinians on the withdrawal.

The Secretary’s message has been for both sides to work together to ensure the mid-August deadline for the start of the Gaza pullout remains on track.

And, a surprise stop in Lebanon on Friday 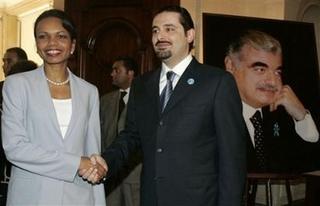 Condoleezza congratulated Lebanon on her surprise stop there for there strides towards democracy:

Secretary of State Condoleezza Rice made a surprise visit to volatile Lebanon under heavy guard Friday to encourage a new democratic government outside Syrian control.

Rice met with Saad Hariri, son of assassinated former Prime Minister Rafik Hariri. Together, they visited the seaside grave of the elder Hariri, an anti-Syrian politician slain in a February car bombing. Afterwards, she went directly to the Presidential Palace for a meeting with Lebanon’s pro-Syrian President Emile Lahoud.

This will be an opportunity first of all to congratulate the Lebanon people on their incredible desire for democracy,” Rice said en route to Beirut.

Update: (Friday AM) I see that Robert Mayer has some great words about Condi’s “government boosting” stop in Lebanon at Publius Pundit.