The Chechen terrorists practiced the Moscow Theatre seizure and attacks on governmental buildings in the video.
VIDEO HERE OF CHECHEN REBEL LEADERS IN AFTERMATH OF MOSCOW THEATRE SEIZURE 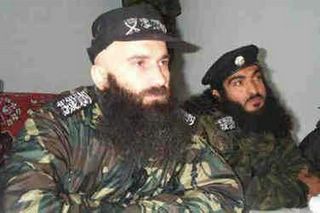 Shamil Basayev who was behind the 2002 Moscow Theatre Massacre took over operations for the Chechen rebels earlier this year after top Chechen rebel Aslan Maskhadov was killed on March 8th. Basayev was also behind the Beslan School Massacre.

Videotape recordings of terrorist “rehearsals” for the Moscow (Nord-Ost) Theatre seizure in 2002 and a number of other terrorist attacks have been found in a cache that reportedly belonged to Chechen rebel warlord Shamil Basayev, Russian deputy prosecutor general Nikolai Shepel was quoted by RIA Novosti as saying.

The recordings were found in the Chechen settlement of Karabulak on June 22. “We also have films of 2002 attacks on governmental buildings and films of Moscow airports and other city sites,” Shepel said.

The building of the Dubrovka theater center in Moscow was seized by terrorists in the middle of a performance on Oct. 23, 2002. About a thousand people were taken hostage by the armed gang who demanded that Russian troops withdraw from Chechnya. Over three days, Russian MPs, celebrities, journalists and doctors held negotiations with the terrorists. Several dozen hostages were released, but on Oct. 26 Russian troops launched an assault using a gas that has been blamed for the deaths of about 130 hostages.