“The only way that terrorism will defeat us is if we lose our nerve, and this will not happen on my watch!”

PRESIDENT BUSH EXPLAINS OUR STRATEGY FOR VICTORY
IN THE GLOBAL WAR ON TERROR,
VIDEO HERE
(in Real Player) 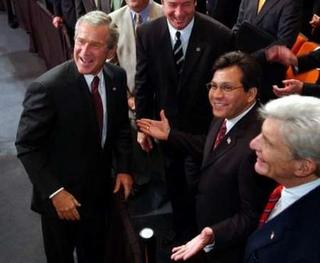 President Bush Says:
* “Free Societies are Peaceful Societies”
* “There is no Hope for Terrorism”
* “Freedom Can be the future of Every Nation!”
* “We have seen Freedom Conquer Evil & Secure the Peace Before”
* “Like Fascism and Communism before, the hateful ideologies that use terror will be defeated by the unstoppable power of Freedom and Democracy”

America Has A Clear Strategy For Victory In The War On Terror and President Bush explained this policy today:

America Must Fight The Enemy Abroad, So We Do Not Have To Face Them Here At Home. By using every available tool to keep the enemy on the run, America’s Armed Forces can ensure that terrorists spend their days trying to avoid capture, not planning their next attack.

The United States Must Deny Terrorists Sanctuary And The Support Of States. By helping friendly governments control their territory and by making it clear to outlaw regimes that providing safe haven to terrorists will not be tolerated, the United States can limit the infrastructure terrorists have at their disposal to plan and carry out attacks.

Mass Murderers Must Not Obtain Weapons Of Mass Destruction. The United States must prevent terrorists from obtaining nuclear, chemical, and biological weapons. This must be a global effort involving many countries.

Freedom And Hope Will Defeat An Ideology Of Hate. Through the spread of democracy, the United States can help deny terrorists the ideological victories they seek. Free nations do not support terrorists or invade their neighbors. By advancing the cause of liberty across the world, we will make the world more peaceful and America more secure.

Since September 11th, America Has Made Great Strides In Winning The War On Terror.

The United States Has Removed Brutal Regimes In Afghanistan And Iraq That Harbored Terrorists And Threatened America. Fifty million people were liberated in the process, and both Afghanistan and Iraq have chosen leaders in free elections.

The World’s Most Dangerous Nuclear Trading Network Has Been Shut Down. The United States has launched the Proliferation Security Initiative, a global effort involving 60 countries to stop shipments of weapons of mass destruction. The black-market network that supplied nuclear weapons technology to North Korea, Libya, and Iran has been shut down, and the government of Libya has even agreed to abandon its nuclear weapons program and rejoin a community of nations.

In The Last Few Weeks, U.S. Forces Have Captured A Number Of Key Terrorists. In Pakistan, one of Osama Bin Laden’s senior terrorist leaders, al-Libbi, was brought to justice. Earlier this week, in Iraq, U.S. forces captured two senior operatives of the terrorist Zarqawi. America has also killed or captured hundreds of terrorists and insurgents near the Syrian border and in a series of raids throughout Baghdad.

The United States Must Transform The Military With New Technologies That Will Make Our Armed Forces Faster, Lighter, And More Lethal.

– The Key To Future Victories Is Transformational Military Capabilities.

– Research And Development Will Make Our Armed Forces The Strongest In The World.

The United States Must Transform The Military By Repositioning Forces At Home And Abroad.

– Closing And Realigning Military Bases Will Free Up Funds To Support Our Troops.

The United States Must, Above All, Transform The Way We Think About War.

– The President Advised Recent Military Academy Graduates To Pursue The Possibilities Others Tell You Do Not Exist.