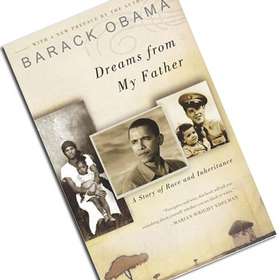 In Time magazine’s latest issue on Lincoln and slavery, Barak Obama seems an odd choice for building perspective. Abandoned by his Kenyan father when he was a toddler, Barak Obama was raised by his white grandparents in Hawaii.

Channeling the voice of Susan Sontag and making about as much sense, Barak Obama speaks a little bit about Lincoln, a lot about himself and a whole lot of make-believe in his essay on Abraham Lincoln in the latest edition of Time magazine.

In “What I see in Lincoln’s Eyes” Barak first compares Abe Lincoln’s humble beginnings with the Indonesian and Hawaiian upbringing Barak enjoyed with his white grandparents. Then, Barak is off talking about his wonderful accomplishments in life and in the Illinois Senate.

“A connected idea attracts us to Lincoln: as we remake ourselves, we remake our surroundings. He didn’t just talk or write or theorize. He split rail, fired rifles, tried cases and pushed for new bridges and roads and waterways.”

Since when does this ultimate pillar of integrity represent “remake”? Abe Lincoln was principled and unchanging in his beliefs and virtues.
(And, “firing a rifle”? Abe was not known as a hunter.)

The next line though is where Obama really loses you:

“In his sheer energy, Lincoln captures a hunger in us to build and to innovate.”

Huh?… Henry Ford or Thomas Edison maybe, but not Abraham Lincoln. That would be one of the last things I would actually think about when I think of Abraham Lincoln… Building something. Again, who is he talking about?

Next the democrat Obama blasts Lincoln’s intentions (how democratic!) as he accuses the Great Emancipator of being racist:

“Still, as I look at his picture, it is the man and not the icon that speaks to me. I cannot swallow whole the view of Lincoln as the Great Emancipator. As a law professor and civil rights lawyer and as an African American, I am fully aware of his limited views on race. Anyone who actually reads the Emancipation Proclamation knows it was more a military document than a clarion call for justice. Scholars tell us too that Lincoln wasn’t immune from political considerations and that his temperament could be indecisive and morose.”

(Do you suppose Obama knows that Abe was one of a handful of Representatives to vote against a bill condemning the anti-slavery folk in Illinois?)

Finally Barak goes into his own life again. This is the only explanation for one of the final paragraphs of the essay here:

“What I marvel at, what gives me such hope, is that this man could overcome depression, self-doubt and the constraints of biography (?)and not only act decisively but retain his humanity. Like a figure from the Old Testament, he wandered the earth, making mistakes, loving his family but causing them pain (?), despairing over the course of events, trying to divine God’s will (Susan Sontag is speaking through him here).”

In “What I see in Lincoln’s Eyes” Barak Obama sees what he wants to see.