THE MOST POWERFUL VIDEO YOU WILL SEE TODAY IS HERE

This video tells the story of how one talented artist helped others less fortunate.

Sarah McLachlan used the money that she would normally spend on a music video, approximately $150,000, and shows how and where she donated the money to those less fortunate. Instead of spending money on makeup, lunches, etc., Sarah helped, among others, a single mother who works 16 hours a day in Ghana and hungry street children is Calcutta. Total cost of video $15, total donated by Sarah $148,270.

* Sarah is one artist making a difference. * 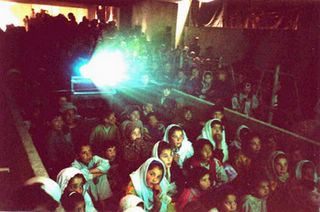 Afghan children watch their first movie, “The Wizard of Oz”, sponsored by FilmAid in 2002.

* Film producer, Caroline Baron, and FilmAid founder, is another artist making a difference *

FilmAid is another wonderful program helping children and adults in the world’s refugee camps by showing movies to horribly deprived people. After Kabul, Afghanistan was rid of the Taliban in 2002, FilmAid came in and set up their cinema in an old barn. Vans of children, many of them orphaned, came to the makeshift theatre to see none other than “The Wizard of Oz”…

One hundred Afghan children squeeze themselves inside a small classroom outside Kabul; the lights dim, and a twister in Kansas fills the screen. It’s “The Wizard of Oz,” and for these children, ages six to 14, it is the first film they’ve ever seen. (It’s hard to believe that film was made in 1939!)

Although the film is in English, the kids are utterly transfixed: their mouths hang open and they gasp with palpable shock when the film blooms from black and white into color.

Not only have these children never seen movies, they have neither TV or radio. Under the Taliban decree, they were never allowed even to see a photo of a woman—or a man pictured from the head down. All song and dance were outlawed. When Caroline Baron, FilmAid founder, asks the children to sing a song for her, she is met with blank stares. The children don’t know any songs.

As the kids spill out of a white minivan, they seem to be performing a magic trick: is it possible that the little van could contain so many children? There are three dozen, at least, or maybe four! They are arriving, along with nearly 400 other children for an afternoon FilmAid screening in an abandoned concrete barn. The kids overflow into old cow stalls—the floors covered with fabric.

Showing pictures from other cultures fulfills one of FilmAid’s goals: to chip away at the often-fatal misunderstanding between peoples. Movies are always selected in close consultation with local leaders. Some of the films are pure entertainment: Charlie Chaplin is always a big hit, everywhere, as are most silent films. Other movies aim to educate in countries where news and information are almost entirely unavailable.

In Kenya, for instance, where FilmAid is up and running, and as many as 14,000 refugees have attended a single showing, screenings address AIDS, health issues, conflict resolution and literacy. After a recent screening of “Mandela,” refugees stayed up half the night discussing this new idea—conflict resolution without violence! Kenyan screenings also address women’s issues in a country where domestic violence is rife.

Breaking down barriers for women and girls is especially important in Afghanistan, where women are still wearing the burka. Before the Oz screening, a group of schoolgirls talked shyly about the upcoming movie, and then it became apparent that they never actually expected to be invited to watch the film—that was for boys. Baron was delighted to tell the girls that, not only would they, of course, be included, but also that the film was a story about a little girl.

Sarah and Caroline… more than Live 8.

You can check out FilmAid and how you can help out HERE.