ARROYO FOCUSES ON CHANGING THE CONSTITUTION IN PHILIPPINES
RATHER THAN FOCUS ON OPPOSITION’S CHARGES,
VIDEO HERE 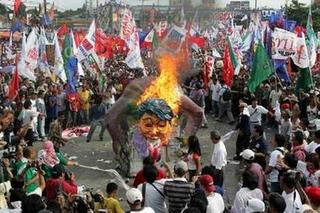 Protesters burn an effigy of Gloria Arroyo near the House of Representatives in Manila on Monday July, 25. (Reuters)

After weeks of protesting, opposition politicians filed an impeachment complaint against Gloria Arroyo today in Manila:

Philippine opposition lawmakers filed an impeachment complaint today against President Gloria Macapagal Arroyo, accusing her of vote-rigging and other allegations.

The filing against Arroyo, a staunch U.S. ally, claims she ”stole, cheated and lied” to obtain and hold power. Her aides have moved to block the complaint on a legal technicality after Congress convenes following Arroyo’s scheduled State of the Nation speech later today. 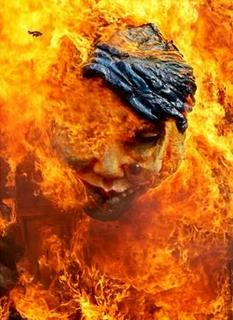 So far, President Arroyo has managed to survive strong opposition protests. But, her desire to stay on as president may be going up in flames. (Reuters)

President Arroyo called for constitutional changes today rather than focus on the charges against her:

In her state-of-the-nation address, Mrs Arroyo said the country should switch from a US-style presidential system to parliamentary government.

Mrs Arroyo’s speech came as opponents filed an impeachment motion over claims she interfered in 2004 elections.

The president said the country’s economy showed promise, but its style of governance was holding it back.

“Our political system has now become a hindrance to our national progress,” she said in a 20-minute speech.

Several charges were brought against her by the opposition today:

Opposition lawmakers said an amended impeachment complaint to be filed today would charge Mrs. Macapagal with culpable violation of the constitution, betrayal of public trust, bribery, graft and corruption and other serious crimes.

Mrs. Macapagal is fighting calls for her resignation over allegations she tried to rig the vote count for the May 2004 presidential polls.

Update: A reader sent this article from the Heritage Foundation on the implications this crisis has on the United States.