Initial reports of the Andijan massacre were sketchy in May as the Uzbek authorities clamped down on the media immediately after the bloodbath. Now, an Uzbek journalist who was there in Bobur Square on May 13th has been able to get her story out to the West. 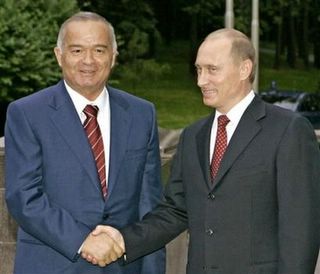 Russian President Vladimir Putin met with Uzbek Leader Islam Karimov in Moscow last week. Karimov has blamed the West! He said in Moscow that the operation was prepared several months and perhaps several years in advance from outside Uzbekistan. And Putin has backed him.

A journalist from the Bobur Square Massacre in Andijan has reported her story to the U. S. Helsinki Commission on Thursday:

An Uzbek journalist has told the U.S. Helsinki Commission she saw for herself the “merciless” Uzbek troops open fire at thousands of Andijan citizens on May 13.

“I was there. I was on Bobur Square in Andijan among thousands of Andijan citizens, when at 5:20 p.m. local time on May 13 the merciless authorities of Uzbekistan opened fire on their own people,” Galima Bukharbaeva, a journalist from Uzbekistan, told the U.S. Helsinki Commission.

Bukharbaeva has worked as a country director of IWPR in Uzbekistan since 2000.

The authorities had not warned unarmed protesters of their plans, she said. “Thousands of people were unarmed and they were not forced by rebels to stay on the square.”

”It was not an Islamic uprising. I did not hear any cries of ’Allah akbar’, or any demands to build an Islamic state. People demanded justice, human rights, economic and social reforms,“ she said.

According to the witness, the protesters did not make any political demands, such as Islam Karimov’s resignation.

There were no foreign mercenaries, neither Chechen militants nor those from Afghanistan. Those who carried arms belonged to the group of friends and relatives of the 23 businessmen, who were arrested a year before and were put on trial in an Andijan city court in February 2005, the journalist said.

The government attacked unexpectedly, she said. ”The shooting of Andijan citizens, everyone who was on the square at that time — children, teenagers, women, the elderly, journalists. It took place in cold blood, without mercy or pity. It was simply professional mass murder. 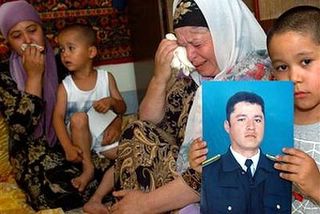 Relatives of a police officer who was killed in Andijan on May 13th.

Uzbek Authorities on Monday, July 4th, cracked down on a pro-democracy US News Organizations. Charges were filed against Internews staff members:

Uzbek authorities have brought criminal charges against Internews, a leading international media rights organization. Internews Network, a US based non-profit media organization, began operations in Uzbekistan in 1995 where it has helped develop Uzbekistan’s independent, private television stations through trainings, technical assistance and support of local news and information programming.

On Monday the Uzbek government formally charged local Internews Network staff with conspiracy to engage in productions of videos and publications of informational materials without the necessary licenses. Two local women staff, a former Internews director and an accountant, are charged with violating Article 190(2)b of the Uzbek criminal code — a crime punishable by up to six months in prison.

Condoleezza Rice called out Uzbekistan in her speech yesterday at the OSCE Meeting in Washington.

Regrettably, the governments of some OSCE states, most notably Belarus and Uzbekistan, are failing to live up to their commitments on human rights, democracy and the rule of law. They reject OSCE’s (Organization for the Security and Cooperation in Europe) offers of assistance, charging interference in their internal affairs. That was a false charge when the Soviets made it and it is a false charge now.

Elsewhere in our OSCE community, frozen conflicts in the Caucasus and Moldova have yet to be resolved through peaceful settlements. And tensions in these regions also must be reduced through Russia’s fulfillment of its Istanbul Commitments. The recent agreement between Russia and Georgia is a positive step toward fulfilling those commitments.

The US has shifted its heavy cargo and air-and-rescue planes from an air base in Uzbekistan to Afghanistan and Kyrgyzstan.

A pregnant Radio Free Europe Reporter was beaten by police on Friday in Uzbekistan.

An Uzbek Opposition Leader is asking the US and EU for funding for the opposition movement.