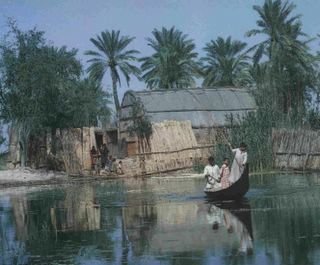 Water is returning to Iraq’s marsh land. And, the Marsh Arabs are also returning.

The Ministry of Water Resources in Iraq has brought water back to 40% of the marsh land that Saddam Hussein had once drained. Saddam drained the water from the area to punish the Marsh Arabs who had been out of the dictator’s control:

Water now inundates 3,350 square kilometers of Iraqi marshes which the former regime had drained and turned into desert, according to the Minister of Water Resources Abdulatif al-Rashid.

In a statement faxed to the newspaper, Rashid said his ministry has completed what he described as “two strategic projects” in the area which made the inundation possible.

Rashid said flooding the area with water was not the only goal of his ministry.

“The ministry is pressing ahead with efforts to reclaim the land, provide water for irrigation and boost agriculture,” he said in the statement.

“The ministry has succeeded in expanding the flooded areas which now form 40% of the southern marshes,” he said.

The news is a major success story for a government embroiled in corruption and a bloody war against mounting insurgent attacks.

Water now flows into scores of small rivers and streams the former regime had either blocked or filled with earth.

“We have breathed life into 70 such streams which are now used to flood the dry areas and carry water to marsh farmers engaged in agriculture,” he said.

The Marsh area used to cover about 8,000. The former regime drained the area after the 1991 Gulf War to retaliate against opponents who used the marshes as a refuge.

The flooding also has made it possible for many of the bird, fish and animal species which once thrived in the area to return.