“World Tribunal on Iraq” speaking for the “oppressed” from Istanbul 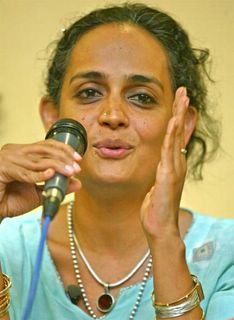 Arundhati Roy speaks during the “World Tribunal” conference in Istanbul demanding that Bush and Blair be put before a War Crimes Tribunal.

Meeting in Istanbul, the leftists decide to charge Bush and Blair with war crimes saying they speak for the oppressed:

The World Tribunal on Iraq, a grouping of non-governmental organisations and intellectuals, will give a hearing to “the voice of the suppressed” and deliver a verdict on the role of US President George W Bush and British Prime Minister Tony Blair in the developments in Iraq, author and social activist Arundhati Roy, now donning the role of a conscience juror for the organisation, has said.

The WTI’s “aim is not to provide universal peace but to make people aware of information and facts that would otherwise remain hidden”, Roy told Turkish daily Zaman in Istanbul, which is hosting the 16th and final session of the tribunal.

“History has always recorded the winners and we are trying to give a hearing to the voice of the suppressed”, she said.

Calling Iraq the “Most Cowardly War in History” …

…As a spokesperson for the jury of conscience, it would make me uneasy if I did not mention that the government of India is also, like the government of Turkey, positioning itself as a ally of the United States in its economic policies and the so-called War on Terror.

The testimonies at the previous sessions of the World Tribunal on Iraq in Brussels and New York have demonstrated that even those of us who have tried to follow the war in Iraq closely are not aware of a fraction of the horrors that have been unleashed in Iraq.

The Jury of Conscience at this tribunal is not here to deliver a simple verdict of guilty or not guilty against the United States and its allies. We are here to examine a vast spectrum of evidence about the motivations and consequences of the US invasion and occupation, evidence that has been deliberately marginalized or suppressed.

Every aspect of the war will be examined–its legality, the role of international institutions and major corporations in the occupation, the role of the media, the impact of weapons such as depleted uranium munitions, napalm, and cluster bombs, the use of and legitimation of torture, the ecological impacts of the war, the responsibility of Arab governments, the impact of Iraq’s occupation on Palestine, and the history of US and British military interventions in Iraq. This tribunal is an attempt to correct the record. To document the history of the war not from the point of view of the victors but of the temporarily–and I repeat the word temporarily–anguished…

Here are some popular writings by Arundhati Roy, an example of leftism at it’s most moronic:

When the Saints go Marching Out

The Loneliness of Noam Chomsky

The Day of the Jackals

Update: (Monday 4:00 PM) Charles Johnson and the LGF‘ers are also talking about the “Moronic Convergence in Istanbul”.