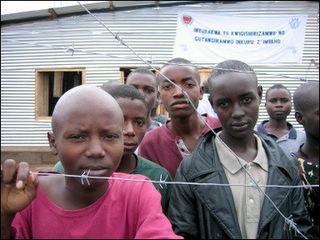 Child soldiers in a “demobilization camp” in Burundi , a country that is coming out of a 12 year Civil War where thousands have been killed.

Violence broke out today near the capital of Bujumbura, Burundi during the first democratic elections in 12 years:

Violence was limited to areas in and around the capital, where the country’s last remaining Hutu rebel group is active. Polling in much of the small central African country was peaceful.

The attacks, including four grenade blasts that killed at least one person and wounded 16, and a shooting incident that injured a UN peacekeeper, came as Burundians chose municipal councillors in the country’s first vote for elected officials since the ethnically driven conflict erupted in 1993.

The violence caused 260 of some 6,000 polling stations to close at midday, by which time an estimated 40 to 45 percent of Burundi’s 3.4 million registered voters had cast ballots, the United Nations said. 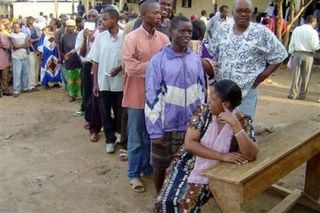 Lining up to vote in Burundi’s first election in 12 years.

The turnout was “good” for this election. Counting has started after many polls were closed early due to violence:

At 3:00 pm (1300 GMT) turnout stood at 52 percent, said the UN Mission in Burundi which had some 5,000 peacekeepers assisting the country’s security forces in providing security for the polls.

This is a crucial election for the ravaged country:

The polls in local elections are seen as a key test of stability in this tiny central African nation struggling to emerge from 12 years of civil war.

In a country long riven by tribal rivalry between minority Tutsis and majority Hutus, the vote is seen as a bellwether for the prospects of carrying through a five-year-old peace process.

The election of 3,225 municipal councillors, the first in a series of planned polls, will be the first time Burundians have elected their own leaders since the outbreak of the 1993 civil war between the Tutsi-dominated army and Hutu rebels that claimed some 300,000 lives.

It is the country’s first exercise in democracy since the overwhelming approval in a February referendum of a power-sharing constitution, which all but the FNL has signed up to.

In Friday’s vote, Tutsis, Burundi’s traditional powerbrokers, are widely expected to lose the political dominance they have held since independence from Belgium in 1962 despite being only 14 percent of the population.

Most analysts and observers are convinced that Tutsi parties will be largely marginalized in the races for local leadership that will be key to who eventually controls the national government.

Despite the presence of candidates from 31 political parties, including six former Hutu rebel groups, and 19 independents — the election is seen as a contest between transitional President Domitien Ndayizeye’s Front for Democracy in Burundi (FRODEBU) and its chief rival, the ex-rebel Forces for the Defense of Democracy (FDD).