The Zimbabwean state run newspaper The Herald declared today that the US and the UK were behind the drought in southern Africa for political gain:

The Herald said climate change has been artificially induced “in a bid to arm-twist the region to capitulate to the whims of the world’s superpowers”.

It is widely seen as a mouthpiece for President Robert Mugabe’s government, correspondents say.

It said recent droughts, which defied predictions by the Zimbabwean government and the Southern African Development Community’s Drought Monitoring Centre, pointed to the possibility of the weather being manipulated for political purposes.

Also today, Roy Bennet was released from prison in Harare. 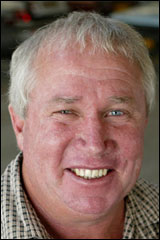 Bennett was released after serving 8 months of a one year sentence.

Roy Bennett was today released from prison in Harare. Zimbabwe’s most famous prisoner of conscience and icon of the struggle for freedom and democracy, walked free from the regime’s notorious Chikurubi high security prison, which in recent years has come to represent the brutal face of Mugabe’s fascist tyranny.

Mr. Bennett, who had noticeably lost weight, said that the conditions were worse than anything he could ever imagine

“I feel very sad for those that are left behind… because I should imagine if one gets to hell, that is what you experience,” he told a news conference.

He was freed after serving eight months of a one-year jail sentence for assaulting a minister in parliament.

He told reporters he had been made to stand naked in front of prison guards and was then given a prison uniform covered with human excrement when he arrived in jail.

He said he now planned to campaign for the human rights of Zimbabweans after spending some time with his family and holding talks with the MDC leadership.