US Puts Pressure on Burma

* Condoleezza Rice may skip the ASEAN Meetings in July
* US House of Representatives pass new legislation
* New study on Human Rights Abuses released
* And, rockers REM broadcast a concert into the country! 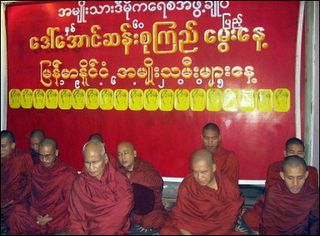 In another strategic move of the Bush Doctrine, clarified in the president’s second inaugural speech, the US turned its attention towards Southeast Asia this week. The US is not satisfied with the amount of pressure the Association of Southeast Asian Nations are putting on Myanmar for democratic reforms.

US Secretary of State Condoleezza Rice may skip the ASEAN meetings in July in protest of the region’s lackluster response to the situation in Myanmar:

If she fails to make it for the ASEAN Ministerial Meeting in the Laotian capital Vientiane in late July, it would be the first time ever that a US Secretary of State does not participate in the annual talks.

The meeting includes a post-ministerial dialogue between the Association of Southeast Asian Nations and its key trading partners, notably the United States, European Union, China, Japan and Russia, as well as an ASEAN Regional Forum, the only official security meeting in the Asia-Pacific region.

Also, yesterday, the US House of Representatives passed legislation (Besides their flag burning legislation) to continue the ban on imports from Burma:

The US House of Representatives overwhelmingly passed a resolution renewing a one-year ban on all imports from military-ruled Myanmar, as part of sanctions for repression of democratic opposition and human rights concerns.

An identical resolution has been introduced in the Senate with 40 co-sponsors and should be dealt with soon, they added.

It would renew a complete ban on all imports from Myanmar until President George W. Bush determines and certifies to Congress that the Southeast Asian state has made substantial and measurable progress on a number of democracy and human rights issues.

The US Campaign for Burma, a group of activists around the world seeking an end to the military dictatorship in the impoverished nation, said the US sanctions were taking a heavy toll on the military junta.

“They have led to a financial squeeze, with military generals having very little money to buy off those opposing them and even to pay the salaries of soldiers in outlying areas,” said the group’s founder Jeremy Woodrum.

Also, a new report has documented dozens of abuses by the military junta:

He says he personally witnessed – and has video evidence to prove – villages being burnt down, the mass slaughter of animals and “numerous” people being murdered.

The 600-page report also documents rape of children as young as five, slave labour, the conscription of child soldiers, massacres and the destruction of villages.

Villagers have given statements that babies were thrown on to a fire during one raid.

And, even US rockers are protesting against the junta! REM broadcast a concert they were playing via satellite into the junta this week for the birthday of Aung San Suu Kyi:

“Losing My Religion” singer Michael Stipe dedicated three songs to Suu Kyi, who recently celebrated her 60th birthday, as he performed in front of 25,000 fans at Dublin’s Ardgillan Castle.

The show was beamed to a Burmese radio station, run by the National League For Democracy Party.

Stipe said: “We pray with our hearts that by your 61st birthday, you will walk free among your people.