VIDEO OF DEMONSTRATORS AND INJURED IN HOSPITAL HERE 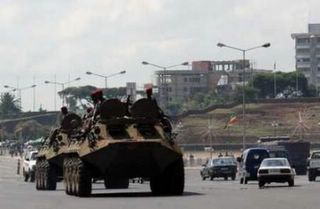 The capital of Addis Ababa looks like a war zone after the violence on Wednesday.

The Bush Administration spoke out against the violence in Ethiopia today:

The violence in Ethiopia that has left dozens dead in unrest sparked by last month’s disputed elections is unacceptable and the government and protesters should show restraint, the White House said on Thursday.

“The threat of violence is unacceptable and we urge students, civil society leaders and opposition supporters and members of the government and political leaders to refrain from violence and maintain a peaceful atmosphere in Ethiopia,” McClellan said.

He said U.S. officials had been in contact with government officials in Ethiopia as well as with opposition groups.

At least 26 people were killed after Ethiopian police on Wednesday opened fire on protesting crowds in Addis Ababa. 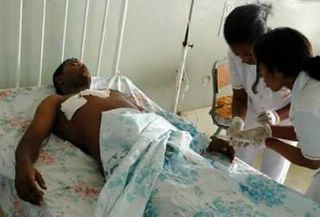 A wounded man at the Black Lion Hospital in Addis Ababa after police fired on protesters on Wednesday.

The capital is at a standstill as taxicabs remain on strike in protest to the fraudulent elections:

Addis Ababa was paralysed by a lack of transport Thursday as some 15,000 taxi and minibus operators began their second day of strike in protest at alleged fraud in last month’s general elections.

Protestors are objecting to the provisional results which indicate a victory for the ruling EPRDF Party.

The first day of strike saw violent disturbances in the city as sympathetic youth threw stones at the extra buses laid on by city authorities. At least 24 people were killed and 40 injured when police shot into the crowd

Business was at a standstill in the capital Thursday morning with many shops and offices remaining shut and little traffic on the streets. 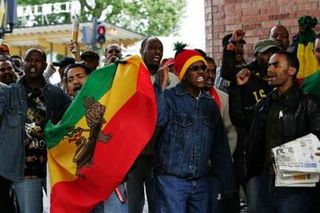 Protesters in Stockholm, Sweden rally at the Ethiopian Embassy on Thursday.

After three days of violence the capital Addis Ababa is virtually devoid of action except for the police who are stationed on the streets:

Relatives are visiting hospitals in Ethiopia’s capital seeking news of loved ones after Wednesday’s violence in which 22 protesters were killed.
A further four have since died of their wounds, with 10 bodies still to be unidentified, say police.

Addis Ababa is a ghost town with only a heavy police presence on the streets.

The city has seen three days of street protests over the ruling party’s alleged massive election fraud and hundreds of young people have been arrested.

Buzz Brockway has been following reactions from the State Department and has news about Congressman Smith.
Publius Pundit has more here.
And, for more on “The Jimmy Factor” go here.
The “Great One”, Glenn Reynolds at Instapundit has linked to this tragic news.