Syria has announced during its parliamentary sessions in Damascus revolutionary steps towards democracy. The Baath Party Congress is meeting this week for the first time in 5 years and has announced authorization of democratic elections with restrictions:

Syria’s ruling Baath party is set to authorize new political parties and free local elections during its national congress this week although hefty restrictions are likely to accompany the reforms, a member said yesterday.

The first Baath party congress in five years comes as the regime of President Bashar Assad is under increasing pressure at home and abroad over allegations of supporting terror, missile tests over Turkey and a clampdown on dissidents.

Ayman Abdel Nur, a self-described “reformer” and Baath party member, told AFP the June 6-9 congress would propose free local elections in 2007 and a new law on political parties, allowing them to form as long as they are not “religion- or ethnic-based.” The two main opposition groups in Syria are Islamists and the minority Kurdish population but the Baath is the only legal movement.

Any new party would have to have branches in every region of Syria and collect a minimum of 10,000 to 15,000 member signatures, Nur said, a restriction that would likely prevent the formation of a Kurdish party because most of the country’s 1.5 million Kurds live in the northeast. 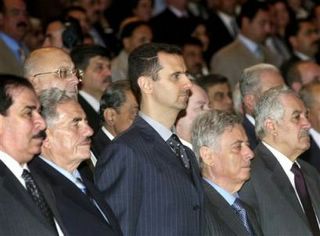 Vice-President Abdul-Halim Khaddam to the right of Syrian President Bashar Assad (in center) stepped down this week.

Syrian Vice President Abdel Halim Khaddam plans to resign to make way for the younger generation, an official of the ruling Ba’ath Party said on Tuesday.

Khaddam made the request at a session of the congress’s political committee on Monday evening chaired by Foreign Minister Faruk al-Shara, participants in the closed-door meeting said.

He criticized Syrian foreign policy over the past few years leading up to April’s withdrawal from Lebanon under international pressure after a 29-year deployment.

The 73-year-old vice president’s political influence has been on the decline for several years.

The Toronto Star this week is claiming that Winds of Change are taking place in the Middle East and in Syria in particular:

The events in Syria’s capital of Damascus (and that of Cairo) are at one and the same time similar and dissimilar. There, the unusual is happening in the most conventional of ways — in government-owned newspapers.

In the daily Tashreen, a Dr. Khalaf Al-Jarrad has called for the ruling Baath party to “take on the difficult and public initiative of self-criticism.”

In the same newspaper, a prominent opposition activist, Michel Kilou has declared, “There is no doubt that Syria as a state, as a society, as a regime, has reached the end of its path and a new beginning is now inevitable.” The controlling hand in Damascus is that of President Bashar Assad. He seems to be undertaking a kind of perestroika or openness in the manner of former Soviet leader Mikhail Gorbachev. His Baath party holds a convention this week, and Assad seems to be attempting a top-down reform of his own authoritarian regime by retiring many of the old guard and permitting the creation of opposition parties.

So the steps are small. But both are clear signs of movement. Of movement, in other words, toward democracy.

At its beginning, democracy is always exceptionally messy everwhere. Thus, in Lebanon, it appears that what’s mostly happened in the elections since the Syrian troops pulled out is that all the old ethnic and religious rivalries that almost destroyed the country in civil wars have reasserted themselves.

Syrian officials also met with Kurds in northern Syria Tuesday after violent protests on the weekend over the “mysterious death” of a beloved cleric.