(You don’t need to speak Spanish to understand this video!) 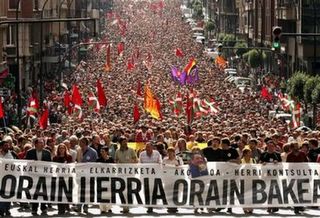 Hundreds of Thousands rally against terrorism in Madrid, Spain…
(Unfortunately, I am told that this picture is from the other rally in Spain is support ot the Basque separatists. Thank you!)

There was a huge rally against terrorism in Spain today.

In Madrid hundreds of thousands of people packed the streets to protest a government offer to hold talks with the armed Basque separatist group.

The rally was organized because of the Socialist (Zapatero) Government’s planned talks with Basque ETA terrorists. 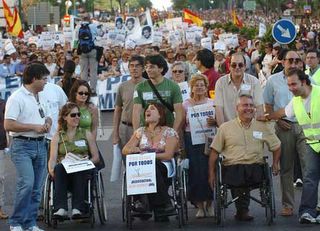 Survivors of ETA bombings wheel down the street in the Madrid March today.

The Instapundit, Glenn Reynolds had mentioned the massive rally earlier today. Barcepundit was reporting on it live from Spain.

AFP has more on the event that brought 850,000 to a million protesters to the streets of Madrid here.

Updates: (6:00 PM) Barcepundit has much more on the background and significance of this rally.

Instapundit has just linked to this report on the rally. Man, could the MSM learn a thing or two from Glenn Reynolds! He is always about 5 steps ahead of the pack!