Mugabe continues his own war on poverty… 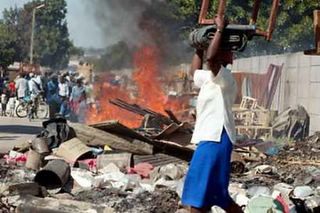 A shantytown home destroyed in Zimbabwe.

President Mugabe is destroying meager homes of the poorest of the poor in Zimbabwe and arresting thousands. The Opposition party is accusing backlash:

Zimbabwe police have arrested more than 22,000 people as a blitz on illegal stores and shantytowns gathers pace, sending homeless people fleeing to the countryside, the state Herald newspaper said Wednesday.

Zimbabwe’s official Herald newspaper said police had arrested 22,735 people in a campaign the main opposition Movement for Democratic Change (MDC) has called a political vendetta against residents of its urban strongholds.

In a statement, State Department spokeswoman Nancy Beck noted that police had clashed with shanty-dwellers during the exercise and warned its citizens in the country to be cautious.

“The arrests have been widespread and are creating the potential of a violent backlash from the affected communities,” Beck said. “However, law and order has not broken down.”

The MDC leader, Morgan Tsvangirai (more on him here with a picture), whose party gains overwhelming support from urban areas, denounced the crackdown and repeated calls for people to mobilize resistance. 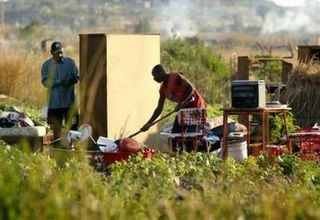 Zimbabweans collecting their belongings after their home was destroyed by the government.

Also, Mugabe is pushing for the “abolition of private land rights” in the country:

He said land-related amendments would include the abolition of private ownership rights, to pave the way for nationalisation. Mugabe noted that “ceaseless litigation” from former white farmers against the compulsory acquisition of their properties had slowed the government’s land redistribution programme, which began in 2000.

“We need finality to the land reform programme. At the moment we are having none of it because of farmer court appeals. This amounts to legal delaying tactics, if the farmers are still appealing to the courts,” Mugabe said.

The government’s land reform programme targeted the colonial legacy of land ownership, in which a small group of largely white commercial farmers owned vast tracts of the country’s most fertile land, but was accompanied by violence and intimidation.

Robert Mayer at Publius Pundit has a powerful posting up today about the China-Zimbabwe connection.

The Zimbabwean Pundit is claiming that Mugabe is eager to consolidate his grip on power.