While Castro remains defiant, Carlos Santana did make his own aplogy to Cuban Americans this week… 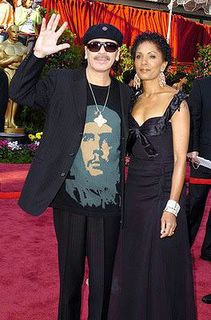 Carlos Santana in his “Che Guevara Gear” at the past Academy Awards. He apologized, sort of, this week.

Since the weather was apparently a little too warm for him to don one of those sweaters he was peddling at K-Mart a few years back, Carlos Santana stripped down to a T-shirt for his performance at this past year’s Academy Awards — which lost him fans in both the fashion industry and the Cuban community. The latter group — ticked that said garment featured a picture of Che Guevara — took it a little more seriously, and mounted a protest at the Miami stop of Santana’s current tour this past week.

The guitarist defended his choice in a statement that read “[The shirt] was worn to honor the soulful young man portrayed in The Motorcycle Diaries and had a profound political epiphany during a journey across South America. It was not meant to be an endorsement about a man who helped to establish the Castro dictatorship in Cuba.” We, like most of the protestors in question, were unaware that they were two separate people . . .

And, that is just more proof that entertainers need to keep with entertaining!