IRAQ IN THE EYES OF THE BBC, VIDEO HERE

Condi is hard to keep up with as she ruffles a few feathers in The Kingdom, warns Syria against tolerating terrorists, expands the International Quartet on Mideast Peace to six, assists a Pakistani rape victim, and completes a successful Iraqi pledge drive in Belgium, all in the last twenty four hours, or so! 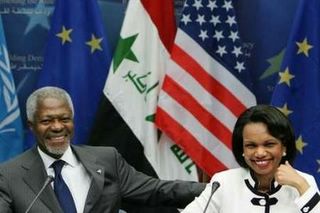 Kofi Annan and Condoleezza Rice wrap up a productive Iraqi pledge drive in Belgium with representatives from 80 countries promising assistance.

Condoleezza said that something needed to be done about the flood of terrorists crossing Syria’s border into Iraq:

U.S. Secretary of State Condoleezza Rice on Tuesday warned Syria not to let its territory be used by terrorists targeting military and civilians in Iraq and politicians in Lebanon.

“It is time for Iraq’s neighbors, especially Syria, to live up to their responsibilities,” Rice said at a one day conference in Brussels attended by 80 foreign ministers from Iraq’s neighbors including Iran and Syria, the Group of Eight industrialized nations, NATO and the Arab League.

“We have forces near that border and we know what is coming across that border,” Rice said referring to Syria’s border with Iraq. The flood of insurgents crossing the frontier “is a real problem for the Iraqi people, and something needs to be done about that,” she told a press conference after the talks. “We have had numerous conversations with Damascus about our areas of concern and the Syrian government knows what it needs to do.”

UN Leader, Kofi Annan, said that the pledge of support at todays meeting was the turning point for Iraq:

But he said the process would not be easy and Iraqis should take control of their own future.

Rice personally extended a hand to Pakistani rape victim during her trip:

The State Department revealed Rice’s personal intervention in the now famous case, after The New York Times reported that the Pakistani government still had Mai’s passport, despite lifting a ban on her travelling last week.

Top Pakistani officials maintained there had been no US pressure in the case of Mai, who was ordered gang raped by a tribal council in 2002, and emerged as a cause celebre for international human rights campaigners.

“Secretary Rice made it clear that Mrs. Mai was welcome to come to the United States at any time and that we were looking to the government of Pakistan to ensure that she was free to travel whenever she wanted,” he said.

Condoleezza also stopped in Saudi Arabia during her Mideast tour. “Crossroads Arabia” has news on that jaunt to “The Kingdom” by the Secretary of State.

And, Arab News has a positive news item titled “Thank You, America”.