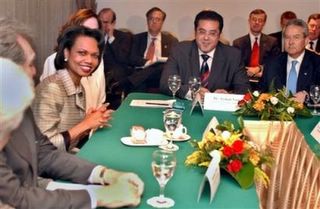 US Secretary of State, Condoleezza Rice, meets with Opposition Activist Ayman Nour (second from right), leader of the al-Ghad (Tomorrow) party of Egypt in Cairo today.

Condoleezza Rice made a strong push for democracy on her visit to Egypt today. Holding nothing back, The “female” Secretary of State spoke at a dinner of 700 guests to explain the new course of action for US-Middle East relations:

Secretary of State Condoleezza Rice made a forceful case for democracy in the Muslim world Monday, telling Egypt’s conservative government leaders “the fear of free choices can no longer justify the denial of liberty.”

Rice’s remarks were to some 700 invited government officials, academics and other guests at the American University in Cairo. The setting is notable, both because Egypt plans multiparty elections in the fall and because the Bush administration has made no secret of its dissatisfaction with political progress and the treatment of opposition figures by the government of Egyptian President Hosni Mubarak.

“For 60 years, my country, the United States, pursued stability at the expense of democracy in this region, here in the Middle East, and we achieved neither,” Rice said. “Now, we are taking a different course. We are supporting the democratic aspirations of all people.”

She lauded Mubarak for calling for elections but said she was concerned for the future of Egypt’s reforms because of the violence that has faced “peaceful supporters of democracy.”

Rice also spoke out for the “Riyadh Triad” from Saudi Arabia in her talk. The three democracy activists are currently held in prison in Saudi Arabia:

Rice took the governments of Saudi Arabia and Egypt, both close U.S. allies, to task for cracking down on dissent.

In Saudi Arabia, she noted, three people are currently in jail for petitioning the government.

“That should not be a crime in any country,” she said.

Rice also offered a brief checklist for democracy to both supporters and opponents of established governments.

Rice also met with Ayman Nour, the leader of the Al Ghad Opposition Party (as she has met before with Belarus Opposition Leaders and Venezuelan Opposition Leader, Maria Corina Machado) The Al Ghad representatives were reluctant to meet with Dr. Rice even though the US was instrumental in gaining Nour’s release from prison earlier this year:

The defensive tone with which Mr. Nour’s Al Ghad Party agreed to the meeting suggested that the candidate — whose detention in late January prompted Miss Rice to cancel an earlier visit — fears that the meeting might cost him more votes than it produces.

“In a meeting of the High Council … it has been decided that the Al Ghad Party will accept to enter into a dialogue with or exchange ideas with any person from within Egypt or from outside of Egypt whether a governmental official or not, except for people from or representing Israel,” said party spokeswoman Gamila Ismail.

“As such, we welcome discussions with any American or non-American official.”

In addition to Mr. Nour, Miss Rice is expected to meet with at least two others who have been publicly critical of the government’s democratic reforms. She also will meet with Mr. Mubarak and make a major policy speech at American University in Cairo.

I hope the other activists she meets with will be more appreciative of the Secretary of State and the US than al-Ghad. But as Big Pharoah claims, due to the constant media coverage it is hard to get past the cemented “Iraq and Palestine” opinions in any serious political discussion in the area and this may be wishful thinking.

Rice also praised Egypt for leading the election reform efforts in the region:

“Egypt has often led the way in this area on so many issues and we look to the Egyptians and the Egyptian people to take a major role in leading reform,” she added.

Update: (Monday PM) Instapundit has Insta-linked to this democracy post. Who would have guessed a year ago that we would be seeing free elections in Lebanon and democratic reform in Egypt in really just the last four months?!