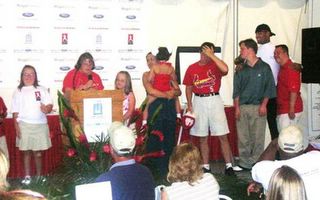 Albert Pujols (in the white shirt) and his wife, Diedre (holding their daughter Isabella) are recognized by representatives of the St. Louis Down Syndrome Association. (GP Photo)

The Pujols Foundation intends to assist at least three charities the year, with Down Syndrome Research being a priority. Albert and Diedre’s daughter Isabella, was born with the condition.