Pissing on "Old Glory" at Raza U 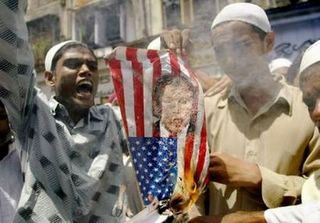 Bush and The US Flag burn at a Raza University Protest in Mumbai, India today.

It is interesting how the news media today will jump on a story if it denigrates our military or our country. The media may get their facts from an anonymous source and rush to print it in a major newspaper or weekly magazine. The story may turn out to be inaccurate. The original accuser may even retract his accusations. But, the damage is already done and our media moves on to their next anonymous sourced Anti-American story.

Yet, here tonight there is actual footage of Muslims burning, spitting on, and making urinals out off our American Flag. And, as US citizens we are supposed to get immuned to a lot of this. Many people believe that we even deserve this! We constantly see Muslims spit on and burn effigies of our president, threaten our country with the words (in English) on their posters, spit on the symbols of our nation, and now today, piss on our flag and our president! 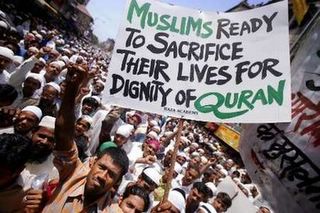 Ready to Die for the “Dignity of the Quran”.

An accurte report on this protest did make it in All Headline News today:

Protesters in eastern India, burned, spat, and urinated on American flags to protest recent reports of Quran desecration at The Guantanamo Bay naval base.

Despite a recent retraction of the initial story by Newsweek, protesters remained convinced the incident occured. 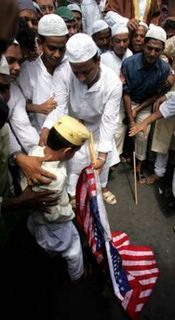 In another protest earlier this last month Indian Muslims in Calcutta urge a young boy to urinate on an American flag. 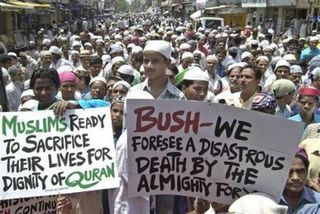 According to the Hindustan Times, Muslims protested against the US for Quran abuse at Raza University, today:

The Raza Academy and the All India Sunni Jamiatul Ulema along with several other prominent Sunni muslim organisations held a massive protest rally outside the Sunni Badi Masjid, Madanpura in central Mumbai to protest the abuse of Holy Quran by the American forces at Guantnamo. 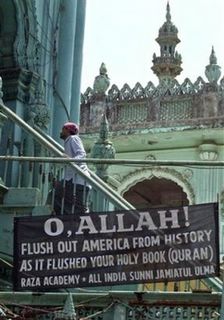 One of the signs displayed at Raza University in Mumbai, India.

Protesters say they are going to lodge a complaint at the World Court against President Bush:

“Till the time US says sorry for the act which has been done by their soldiers or officers this protest would continue,” said Maulana Ali Khan, General Secretary, AISJU.

Khan said they are also planning to lodge a complaint with the International Court against Bush and soldiers found guilty of desecration of the Koran.

Update: For those who may find use the word “Pissing” too harsh, this article at “Gut Rumbles” here may help out.