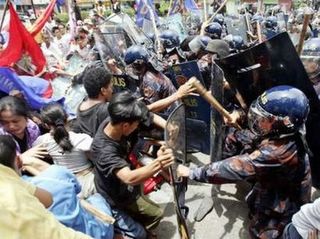 Protesters scuffle with police in Manila in anti-government protests on Saturday.

The situation in the Philippines remains tense after the accusations from the Opposition and media on corruption by the Arroyo Administration. But President Gloria Arroyo says she will not be moved by the protests:

Philippine security forces are on alert for anti-government demonstrations expected on Independence Day, but President Gloria Arroyo said she would not be cowed by threats against her rule.

Marines were guarding highways around the capital, while riot police were on standby at vital installations, officials said.

Left-wing groups and those allied with the political opposition threatened mass protests on Independence Day to call for Arroyo’s ouster.

However anti-government rallies on Saturday failed to draw the mass support organisers had hoped for. About 2,000 people from various opposition groups converged on the Manila post office in what was a relatively peaceful demonstration.

“John Marzan”, a reader at GP, has provided me with a wealth of background information on the situation in the Philippines since I posted on a Manila demonstration last week. Here is some of the terrific information John provided…

From the Daily Tribune:

In what could be the most draconian measure yet adopted by the Arroyo administration against alleged anti-government cons-pirators, Justice Secretary Raul Gonzalez yesterday warned that media practitioners and other persons in possession of an audio recording allegedly involving President Arroyo and an election officer discussing fraud strategies for the May 2004 elections may be arrested. (See related story)

Gonzalez said the arrest, which may be done without a warrant, would be for violating a 40-year-old law passed during the martial-law government of then strongman Ferdinand Marcos.

John volunteered the website here where you can download and listen to the damning parts of the tapes of President Arroyo who says the tapes were doctored.

My sense is that most people haven’t heard the tapes on tv or radio yet because of the Justice Secretary Gonzalez’ ban. I’d just like to add, but the call for GMA’s resignation is slowly building as more and more people are beginning get hold of these tapes. Right now, it’s only those with internet access that are able to listen to them.

Also,… A.M. Mora y Leon at Publius Pundit has an exceptional roundup on the situation in the Philippines, and adds this…

The Philippines is seeing massive protests over the discovery of a tape which purports to show that that President Gloria Macapagal Arroyo, the daughter of a founding president of the nation, rigged her re-election last year, a contest she just barely won. She got her initial power in a People Power coup in 2001, an event I witnessed in Manila, and now apparently it’s her turn to exit the same way. Sad, because none of this is democratic. Much of the blogging sentiment around Manila is that bad as she is, the threat to democracy is worse. Whether that threat is in stolen elections or in mob rule is where the debate is.

I’ve never liked her. Not only is she a coward, sullying her nation’s word and honor during the Iraq War to be The Oprah President, she’s too elite, too Davos for my sensibility.

She’s the IMF-lovin’ economist who hiked taxes. To keep the Philippines’ overabundant undercompetent bureaucrats on payroll. Never mind its impact on the private sector.

She also made birth control in a Catholic country a priority, something that goes over like bikinis in Kabul, such cultural sensitivity! But so pleasing to the UN types she’s beholden to and wants the good favor of. Regardless of what you might think of birth control as an option, I think her public spending on it was for the wrong reasons: because she was convinced that the economic growth needed to employ growing numbers of Filipinos was impossible. So, the fewer Filipinos, the better. She never believed in the potential of her people. That says a lot about her leadership.

A history of the secretive tapes is here.

Much more at:
Philippine Politics ’04
And, A.M. Mora y Leon has been following the story at Publius Pundit

Previous Post on GloriaGate:
Wire Taps & Protests in the Philippines