No Blue Fingers in St. Louis

No tears and hugs at this Iranian Presidential Election polling site in St. Louis… 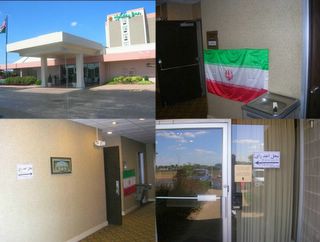 Images from the Iran Presidential Election Site in St. Louis, MO
Friday, May 17, 2005.
Low voter turn out is the story here!

Well, I was hoping that the Iran Presidential Election story would precede me here in St. Louis, MO. But, despite my best efforts, the scene remained subdued. The voting was light to non-existent at this midwest polling station. I checked out the Holiday Inn polling station three times this evening and did not interview any voters, did not see any police or demonstrators, and did not see more that 5 Iranians cast votes. Even the Local News Channels did not seem interested in the story. And, the local FBI did not know anything about, nor seem interested in the story, either. As for the Holiday Inn staff,… that might as well have been a Shriners Flag hanging in their hallway. They didn’t know jack!

Will Franklin at WILLism’s made a grand showing at the Houston Iran Election site. It sounds like he created quite a stir! But, he sure came away with some great pictures of the event!

Robert Mayer at Publius Pundit posted the news this morning about the Iran Illegal Polling Stations. Robert also posted a list of the polling locations here. Robert has much more on the Sham Elections held today in Iran.

The news from Iran tonight is that the election is heading to a runoff.

Leading reformist candidate Mostafa Moin, brushing off U.S. criticism of Iran’s presidential election, said on Friday the poll was genuine if not perfect.

“It might not be an ideal election for us, but the basics are there,” the former education minister told Reuters in an election day interview at his campaign headquarters in Tehran.

The UPI is saying that Bush’s denouncing of the election the day before was seen as support by the opposition.

Michael Ledeen at National Review Online has a brilliant article from yesterday that explains “when an election is an election and when it is not”.

Regime Change Iran is chalk full of news on the election.

Michelle Malkin and Instapundit are talking about the election.

Update: (Saturday Day)Robert Mayer of Publius Pundit has an extensive post including an “interesting” interview with a Iranian poll watcher in Arizona. What a discussion!

And,… Will Franklin at WILLism’s has video clips up of his interviews at the Houston polling place.