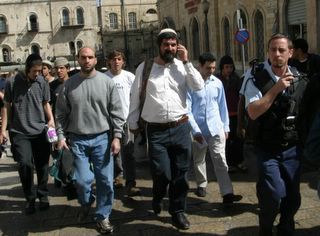 David Ha’Ivri on a visit to the Temple Mount to pray. He was sentenced this week to 4 months of community service.

David Ha’Ivri is convicted of racism for wearing controversial T-shirt:

The chairman of the Revava organization for Jewish access to the Temple Mount, David Ha’ivri, was convicted this morning in Magistrate’s Court of incitement to racism. The sentencing hearing has yet to be set.

The charges stemmed from a t-shirt he distributed that had the slogan “No Arabs – No Terrorism”. In June of last year, Ha’ivri was sentenced to four months in prison, commutable to public service for the relatively minor charge of “obstruction of justice”. He was acquitted at the time of the original charge of incitement to racism due to police misconduct.

Ha’ivri stated in reaction to today’s conviction: “The Israeli police are trying to implement the opposite policy of expulsion of Jews from their homes, with the claim ‘No Jews – No Terrorism’. The state needs to file the charges against the prime minister for the expulsion he is planning.”

Ha’Ivri was sentenced this Wednesday to four months of community service. He is also charged with an incitement of rebellion charge which he is appealing.

David Ha’Ivri is the chairman of Revava “a Jewish grassroots organization whose goal is to restore self esteem to the state of Israel by restoring Jewish national pride and values.” David has a weekly internet radio program through Hevava in English and Hebrew.