Is this really a surprise? 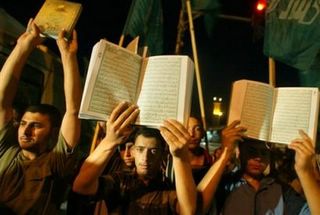 Hamas supporters protested yesterday in Gaza City after accusations of Quran abuse by Israeli prison guards. Several distraught Palestinian prisoners started their own hunger strike in retaliation. This news comes from Aljazeera (and not Newsweek):

Palestinian prisoners say that Israeli soldiers desecrated the Qur’an at the “Megiddo” prison.

Prisoners reported that Israeli security forces tore and stepped on three copies of the Qur’an during a search operation inside the prison.

The Palestinian detainees started a hunger strike and said that they will refuse to see visitors to protest the desecration of their holy book.

Israeli prison service officials denied the reports, claiming that the torn pages were from a different book.

However, they said that soldiers may have “shaken” the Qur’an during the search for weapons and cellular phones inside prison cells.

Israel said Wednesday that the whole matter was a fabrication by the Palestinian prisoners.