100 journalists were arrested during a demonstration in Nepal today… 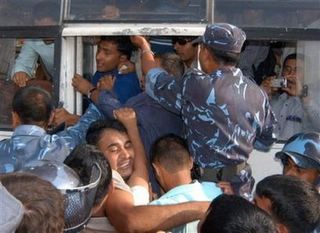 Police push arrested journalists into the back of a bus on Monday.

Journalists were loaded into trucks and hauled off today in Nepal as they protested for more freedom of press:

Police arrested nearly 100 journalists Monday after scuffling with them during a protest to demand King Gyanendra immediately lift media restrictions in Nepal imposed four months ago.

Also, today the army said communist rebels killed at least six soldiers and two police patrolling near Ghartichap village in the mountains about 50 miles west of the capital, Katmandu. In the ensuing battle, six Maoist rebels were also killed.

Gyanendra seized control of this Himalayan kingdom Feb. 1, fired the government, and imposed a state of emergency, saying the restrictive measures were needed to quell the communist insurgency. He suspended civil liberties, including freedom of the press, and jailed hundreds of political prisoners.

The King may have been upset about the reports that came out from India about his wife and deputy:

Nepal’s Royal government has plunged into controversy following reports that King Gyanendra’s deputy and his wife were among blacklisted defaulters who failed to pay back loans obtained two decades ago, costing the treasury losses worth over 20 million Nepalese rupees.

In two separate reports, The Kathmandu Post daily said that Tulsi Giri, Vice-Chairman of the Council of Ministers and his wife Sahara had obtained loans which they never paid back.

Sahara obtained loans some 21 years ago for her trading company from the then state-owned Nepal Bank Limited, the daily said in a report today. General Electronics, an electronic goods trading firm in which Sahara and Tulsi’s cousin Subodh Giri had shares, has been blacklisted for failing to repay Rs. 4.12 million to the bank, it claimed. 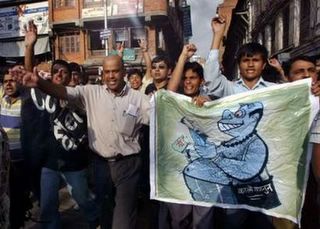 The government on Friday did rule to allow Indian cable news channels back into the country after a five month hiatus:

The restriction was one of several imposed on the media since the royal takeover.

Criticism of the king, the government or security forces has been banned, along with any independent reporting on Nepal’s communist insurgency. Journalists must get all information on security issues from the army or police. Private radio stations may not air news programs.