VIDEO OF FARM SEIZURES IN 2000 HERE.
Interesting how the fears of these people played out.

With a program called “Drive out the Trash” you get a sense of how President Mugabe feels about certain Zimbabweans. And, when the government destroys their homes, destroys their means of earning a living, and destroys their food, in a country already threatened with famine,… only time separates these people from certain death.

The genocide has begun in Zimbabwe.

The United Nations estimates up to 1.5 million people are homeless. 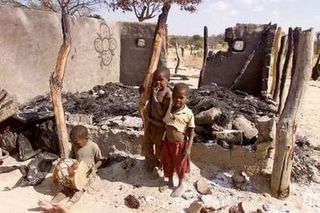 Three children left with only a drum after soldiers destroyed their family’s home in Zimbabwe. Mugabe has displaced nearly one tenth of the population of Zimbabwe.

A police spokesman says that the government is already seeing results since their planned destruction of homes in Zimbabwe:

More than 42,000 people had been arrested or had their goods seized as Zimbabwe pressed ahead with a crackdown on shanty-towns that has sparked worldwide condemnation.

Police said crime in the capital Harare had fallen by nearly a fifth since the start of “Operation Restore Order” in early May.

“This shows that the operation, despite being condemned, has started bearing fruit,” police spokesman Inspector Whisper Bondai told the official Herald newspaper.

President Robert Mugabe says the operation is necessary to flush out criminals who have turned informal townships into sanctuaries for illegal trading in anything from food to foreign currency.

But critics say the exercise has left tens of thousands homeless or without jobs, piling pressure on Zimbabweans facing 70 per cent unemployment and chronic shortages of foreign currency, fuel and food. 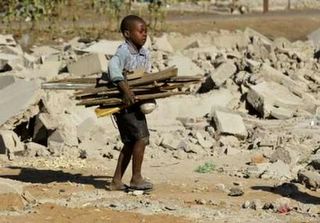 A young boy collects scrap wood from a destroyed township in Zimbabawe.
45, 000 have been arrested by the Mugabe government.

The crackdown — at a time of food shortages in Zimbabwe — is the latest escalation in the government’s monthlong Operation Murambatsvina, or Drive Out Trash, which has seen police torch the shacks of poor city dwellers, arrest street vendors and demolish their kiosks.

The current crackdown comes when this southern African country needs to import 1.2 million tons of food to avoid famine. Years of drought and the seizure of thousands of white-owned farms for redistribution to black Zimbabweans have slashed agricultural production.

Many poor families depend on their vegetable patches for food and a tiny income at a time of 144 percent inflation and 80 percent unemployment.

Many of the capital’s 2 million residents till any vacant ground they can find for an annual production of 50,000 metric tons of corn — over a fifth of their total food requirements — according to Richard Winkfield, an expert on Zimbabwean farming.

The Rev. Oskar Wermter, former secretary to the Zimbabwe Roman Catholic Bishop’s conference and a parish priest in one of the poorest downtown areas, called the crackdown against these plots “insane and evil.” 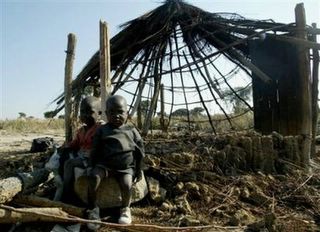 Two children sit near their destroyed home. There are reports of violence caused by the crackdown, although the government claims otherwise.

British Foreign Secretary Jack Straw has accused African leaders of denying the “horror” taking place in Zimbabwe and failing to crack down on President Robert Mugabe.

Mr Straw says that African leaders need to “recognise the horror” taking place in Zimbabwe and until they do, it will not stop.

He says that unless African leaders unite against him, Mr Mugabe will continue what he calls a clean-up campaign for many months.

Publius Pundit and Robert Mayer also continue to report on the situation.

Zimbabwean Pundit reports that the people are fighting back (I would imagine so).

Update: (3:30 PM) Norman Geras at Normblog has a moving post up on the utter horror in Zimbabwe. Glenn Reynolds has Zimbabwe links today.