Iran’s election results may look bad for Bush and the US.
Too bad it’s a sham! 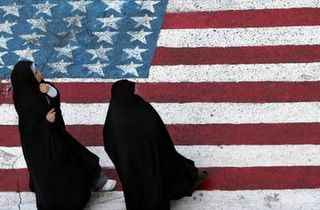 Two women walk on a US flag in Tehran. A hardliner won the presidential election in Iran this weekend.

After Australia, the US, Great Britain (check out the biased title in this post… it wasn’t that Tony won, it was that his lead was shaved!), Germany’s regional vote, the French EU vote, the Netherlands EU vote, not to mention… Iraq, Ukraine and Lebanon… the MSM finally has an election that they can beat up George W. Bush about. Too bad the election is a sham.

But you wouldn’t know it is a meaningless election full of fraud and pretender candidates from these headlines slamming President Bush and the US:

US “humiliated” after Iran Election

But, before the Ayatollah rubs it in too much, he makes sure that there are no disturbances from disgruntled voters…

Iran’s Supreme Leader Bans Victory Celebrations (this is in code for “no protesting!”)

Robert Mayer at Publius Pundit has been following the election closely.
Will Franklin at WILLisms has been checking out the polling spots stateside.
And, Regime Change Iran has been doing double duty these past few election weeks.