And, here is a slideshow of the destruction, including burning homes in the night!

Zimbabweans are voicing anger at the weakness of the Opposition. 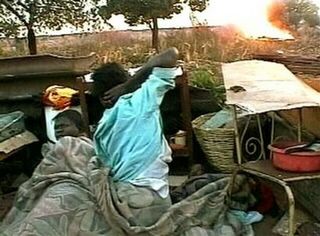 A family in Zimbabwe wake up on a roadside among whta is left of their belongings. They are one of the thousands left homeless earlier this month in President Mugabe’s “Drive out the Trash” campaign.

President Mugabe feeling the heat from the international community vowed to begin building hundreds of homes for those he displaced. This announcement of course came after his five week long campaign that has left anywhere from 200,000 to 1.5 million homeless!…

Hundreds of homes have been built in Zimbabwe’s capital to replace some of the thousands destroyed in a widely criticized official “cleanup” campaign, the government said Saturday ahead of a planned visit by a United Nations envoy.

President Robert Mugabe earlier scorned Western “demonization” of his five-week program called Operation Murambatsvina, or “Drive Out Trash,” which has left between 200,000 and 1.5 million Zimbabweans without homes or livelihoods.

Saturday’s announcement followed the condemnation by 10 U.N. human rights experts of the demolition of tens of thousands of homes in shantytowns and the destruction of street markets and vegetable gardens. More than 200 international human rights and civic groups Thursday demanded an end to the campaign, as have Western governments, including the United States, Britain and Australia.

The EU criticized the African Union for not speaking out strongly against the inhumanity of Mugabe’s human rights violations. EU Commission President Barroso made the statements on a vist to South Africa.

Barroso discussed Zimbabwe with South African President Thabo Mbeki one day after African Union officials said they would make no statement on Zimbabwe’s latest crackdown. A ferocious government blitz against illegal homes and businesses has left tens of thousands of people homeless.

“I was disappointed with the statement made by the African Union,” Barroso told a news conference.

“Questions of human rights should be the concern of all people … these are universal values and everybody should respect those values.” 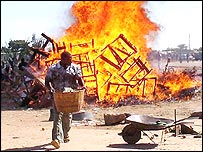 A man carries his belongings as he takes a look back at a burning home in Zimbabwe.

Zimbabwean aslylum seekers will not be returned to Zimbabwe as was planned from Great Britain. This came after several protests including a hunger strike by one of those seeking political asylum from Mugabe’s regime.

There are rumors of secret talks to oust Mugabe in Great Britain.

Another powerful website on the current crisis in Zimbabwe is Kubatana. You can check it out here.

Publius Pundit and Zimbabweanpundit are excellent resources on the crisis as well.

Instapundit has linked to this news today.