A bogus election brings out the Bush haters. 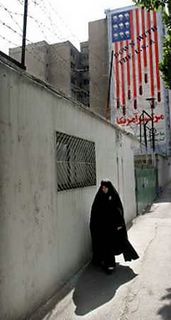 “Down with the USA” American Flag banner on a building in Tehran. The stripes are streaking missiles. The stars look like little mullah heads.

The Carnegie Endowment for International Peace takes the prize as the first Anti-American organization to bash President Bush and side with the Mullahs of Iran on their bogus presidential election. Thomas Carothers, head of the democracy and rule of law projection for the endowment, had this to say on Monday:

“The Bush administration’s democracy policy is rife with contradictions and double standards and that undercuts its credibility in the Middle East and the world,” said Thomas Carothers, head of the democracy and rule of law projection for the Carnegie Endowment for International Peace.

“Clearly one could legitimately criticize some of the democratic procedures in Iran. But the administration has just sounded snarly and dismissive,” Carothers said.

It’s kind of funny how he refutes himself from one sentence to the next! In the first paragraph he complains that the Bush is not consistent without giving examples ( a common practice for a poor argument). I am not going to speculate too much but even with Uzbekistan the administration has started to withdraw forces. Then Thomas says you “can” criticize Iran (ok)… but just don’t be mean about it! (huh?) Why is this man getting any print?

Another liberal group, the Institute for Policy Studies, also chimed in on the bashing:

“The Bush administration only supports democracy when its outcomes are what it wants,” said Phyllis Bennis of the Institute for Policy Studies, a liberal think tank frequently critical of Bush foreign policy.

“Democracy is a very partisan issue for the administration. Bush has seized on words like ‘democracy, freedom and liberty’ to justify his interventionist foreign policy,” Bennis said.

The Institute for Policy Studies makes no secret their desire to defend and promote UN-style internationalism:

Some liberals think they have found a way to defend U.N.-style internationalism without suffering a political beating from the right.

“More than 1,700 U.S. soldiers have died in Iraq, and the administration has spent $200 billion on the war,” said Nicole Mlade, a senior policy analyst at the liberal Center for American Progress in Washington, D.C. “You don’t have to look any further for confirmation that (international) cooperation pays off.”

While that is not an entirely new political strategy, the left sees indications that public support is moving in that direction.

And, yet, these groups have the nerve to claim that it is the Bush Administration that is playing politics with these international developments!

Here is the winner for most ignorant article to make it out of the Democratic Underground and into publication:

Ahmadinejad and Bush: Separated at Birth?