“On behalf of the Kurdish people I wish to thank the American President George W. Bush, the American administration, the American people and their military who helped in overthrowing the cruelest dictatorship and to liberate us. We will never forget this brave decision, and we reassure them that we will be together in confronting terrorism and in building a federal democratic Iraq. I would also like to thank British Prime Minister Tony Blair and the British people, their military, and all members of the coalition and multi-national forces.” 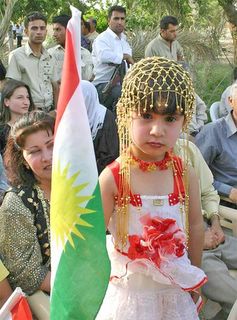 A young Kurdish girl celebrates the swearing-in of Masoud Barzani as the regional leader in Kirkuk, Kurdistan on June 14, 2005.

From Rebel Leader to President of Kurdistan!

Former rebel leader Massoud Barzani took the oath of office to become the first president of Iraqi Kurdistan during a ceremony in the autonomous region’s parliament in Arbil.

“I promise to safeguard the accomplishments of Kurdistan and to carry out my duties faithfully,” Barzani told the gathering which included Iraq’s President Jalal Talabani, his former Kurdish rival. 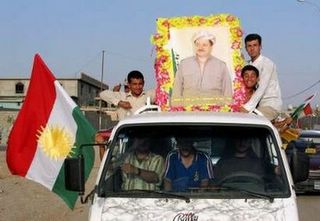 Kurds celebrate in Kurdistan yesterday during swearing in ceremonies.

Meanwhile, today the Washington Post is alleging that US forces collaborated in unlawful detentions of minorities in Kurdish Iraq:

Key Phrase- *Sometimes with knowledge of US forces*

The detainees have been abducted by police and security units led by Kurdish political parties and sometimes with the knowledge of U.S. forces, the report said, citing government documents and families of the victims.

The newspaper said it had obtained a confidential State Department cable addressed to the White House, Pentagon and the U.S. Embassy in Baghdad that “raises concern” about the unlawful detentions and transfers.

Kirkuk is claimed by three ethnic groups — Kurds, Arabs and Turkmen — and has seen an alarming increase in violence and tension, officials say.

The cable described the detentions as being part of a “concerted and widespread initiative” by Kurdish political parties “to exercise authority in Kirkuk in an increasingly provocative manner,” the newspaper said.

(Whenever you see the “raises concerns” you know the media is going to beat this story like a dead horse.)

Update: (Thursday AM) Glenn Reynolds, the vacationing Instapundit has linked to this “Good News from Kurdistan”.