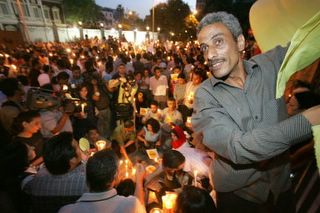 About a thousand demonstrators gathered in Cairo to protest the violence by regime thugs during last months election.

Protesters gathered after dark in Cairo on Wednesday night to denounce the violence by pro-government thugs against Kefaya protesters in last months election:

About a thousand people carrying candles and singing patriotic songs gathered Wednesday in Cairo to protest violence by pro-government supporters during a referendum last month on electoral reform.

Many of the demonstrators carried yellow flags bearing the name of the opposition Kefaya (Enough) party which called the rally or carried banners calling for an end to corruption and police oppression.

“Terror will not dissuade us from achieving liberty,” said one banner. “No to torture by police and security services,” said another.

Kefaya called on demonstrators to assemble near the grave of Egypt’s “father of independence,” Saad Zaghlul, a nationalist leader who spearheaded the fight to end British occupation in the late 19th and early 20th centuries.

Holding lighted candles, protestors sang to the tune of the national anthem, “Kefaya, Kefaya, we are at the end of our rope.”

A diverse grouping of political activists, young and old, joined the demonstration, including some women who arrived from the nearby shrine of the female saint, Sayyeda Zeinab. 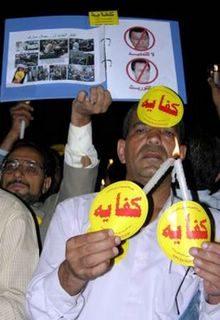 Kefaya members say “no” to torture and abuse by police.

Activists believe that President Bush and the US Administration understand today the problems with supporting dictatorships in the region:

Mr Ibrahim believes US President George Bush and Secretary of State Condoleezza Rice are at last beginning to understand the long-term effects of supporting brutal dictatorships in the Middle East.

He says it backfires in the long term, and feeds extremism. The two masterminds of the 11 September 2001 attacks, Osama bin Laden and Ayman al-Zawahiri, were from the two main US allies in the region, Saudi Arabia and Egypt.

Violence broke out on election day last month as protesters for the Kefaya movement were beaten and women groped by a pro-government group of protesters.

Last week around 500 protesters held a rally on the steps of the Press Syndicate in Cairo to denounce violence against women.