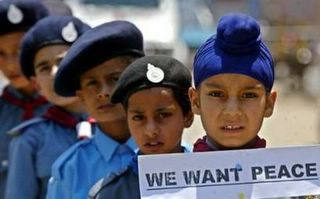 Kashmiri students hold placards during a march in Srinagar on Wednesday, June 15, 2005. Hundreds of school children took part in the march organized by the Indian Army in Srinagar to protest a blast outside a school in Pulwama in which 15 people including two children were killed this week.

Earlier today, Pakistani Information Minister Sheikh Rashid was accused of running a Kashmiri separatist training camp. Militant Separatists have been blamed for the violence in Kashmir that has left thousands dead:

His comments come after Jammu and Kashmir Liberation Front chief Yaseen Malik’s comment in Pakistan suggesting Sheikh Rashid ran terror camps, where 3,500 militants were trained. The leader has since denied the remarks.

“Yaseen Malik has spoken the truth. I worked as a senior office-bearer of the JKLF till 1994. I have interacted with cadres trained at his camp in Ternool,” said the man who had hijacked an Indian Airlines plane in 1971.

Qureshi, who is now opposed to the armed struggle, said all JKLF camps were run from Rashid’s farmhouse, which is 13 km from Rawalpindi. 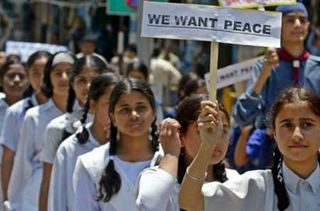 School girls protest for peace in Srinagar earlier today. A car bombing outside of a school left 15 dead including three school children on Monday, June 13th.

…There is so much pressure on Musharraf in keeping Osama out of the US’ reach that he has so far refused to permit the US forces to comb the area to capture the al Qaeda chief.