I used to think that you had to be some kind of mega-mensa to be a public servant in the US, but that was before I observed John F. Kerry. He always seemed a bit slow to follow Teresa’s comedy act as if he were a punch drunk ex-fighter.

And, anyone who throws a sissy pass like he does ought to know it,… and ought to be smart enough to just stop it! Americans are not rushing to the polling booths to vote for a sissy-thrower no matter how much you pay them.

Then, when his shameful grades came out this last month you knew your inclinations were right all along. John Kerry is a dope. His Lurch-ian college picture doesn’t help his cause much either. He looks like the kid that suffered from innumerable snipe attacks and short-sheeted nights at prep school. 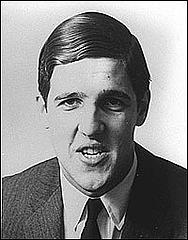 At least Bush was drunk.

Today, “His Drab-ness” is calling on Bush to “Just Tell the Truth”. Mr. “Christmas in Cambodia” sporting a new “Magic Hat” is asking the president to tell the truth!

And, the rice-in-my-a$$ medal winner uses his collective three months of military prowess where he managed to come under more fire than a Monty Python hunting trip to tell the president how to run a war.

In Carter-esque style, this loser from November in typical defeated Democrat fashion, predictably pounds the president on the current non-progress (But, I love the troops!) of our fighting men and women. Like Carter, he doles out unsolicited advice. He even serves the grand advice of moving the Kurdish Peshmerga into a more active role.

As if – the Peshmerga , – are suffering – from the lack of – attention!

It’s too bad the NYT gives these guys page space. It’s as addictive to him as an Insta-lanche is to a beginner blogger. If the MSM would just ignore them right off we wouldn’t have to suffer through years of their hateful Anti-American tirades. But, this little bit of attention will probably keep “His Drabness” in the media spotlight for years to come.