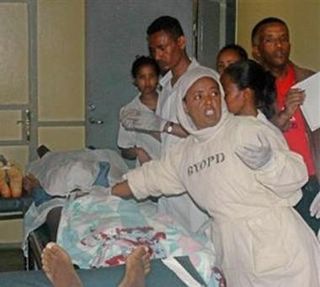 One of at least 8 casualties at Black Lion Hospital from the third day of escalating violence on the streets of Addis Ababa, Ethiopia.

Ethiopia has completed its first democratic election in, get this,… “3,000 years!” This obviously has Ethiopians worldwide hopeful for the future of their homeland. Here is part of an email I received earlier in the week:

“It is a powerful statement, and as an Ethiopian-American, I am frenzied that no one in the States is covering the birth (and possible quick death) of a new Democracy in Ethiopia, an ancient land of 74 million people.”

“One of the largest countries in Africa just had its first real elections in its 3000 year history– with a 90% turnout! It’s been a long time coming!”

However, thanks to the Carter Institute and Jimmy Carter the situation on the ground in Ethiopia has slipped from bad to worse. The Opposition Party members had at first accused the ruling party of using illegal means to cling to power. Over the following few weeks their anger fomented to where we are tonight with rioting and 22 dead protesters in the capital of Addis Ababa.

TRENDING: “This is the Beginning of the End of the Pandemic” – Dr. Stephen Smith Announces Hydroxy-Choloroquine Study that is “Game Changer” in Battle Against Coronavirus (VIDEO)

The successful completion of the third national elections indicated that democratic culture has been flourishing in Ethiopia, the US-based Carter Center has announced.

Former US president Jimmy Carter said on the occasion the national elections laid a firm ground for the development of democratic culture in the country.

Carter, who arrived here Thursday to observe the third federal and regional parliamentarians’ elections in Ethiopia, ascribed the massive turnout of voters to immense contributions of the mass media.

The Carter Center also appreciated the decision the National Electoral Board of Ethiopia (NEBE) made to extend the balloting hours because of a massive turnout of voters on the polling day.

According to the observers of the Carter Center, there were some problems in the balloting process like inability to monitor voters’ identification cards, beginning balloting process before counting out the voting papers, and allegedly allowing under-aged persons.

In fact, the Carter Center said, balloting was started a bit later than the scheduled period in some polling stations.

Despite the problems, Carter congratulated the Ethiopian government and its people on the successful completion of the national elections.

Jimmy had his press conference, packed his bags, and took the next flight out of Addis Ababa congratulating himself and his Institute for another job well done.

However, Jimmy didn’t expect that the EU observers would come out with a different assessment on the election (as reported by Instapundit and Robert Mayer at Publius Pundit).

The EU observers reported major flaws in the process and were very critical of the situation:

Ethiopia’s electoral board appears to have lost control of the vote counting for the May 15 legislative polls, European Union election observers said in a report obtained by The Associated Press on Wednesday.

The confidential report went on to say the EU might have to make a public denunciation of developments to distance itself from “the lack of transparency, and assumed rigging” of the vote

“Ten days after the polling day, the situation is of political uncertainty and informational chaos regarding the results of the election,” according to the confidential report.

Further, as Glenn Reynolds pointed out from the article, “Jimmy Carter made things worse!”…

The EU report also said former U.S. President Carter, who led a team of 50 election observers, undermined the electoral process and EU criticism with “his premature blessing of the elections and early positive assessment of the results.”

Unless there is a “drastic reverse toward good democratic practice” the observer team and EU “will have to publicly denounce the situation.”

“Otherwise, the EU jointly with ex-President Carter will be held largely responsible for the lack of transparency, and assumed rigging, of the elections.”

So now after seeing the situation fall completely apart, apparently Jimmy Carter and the Carter Center are backpedaling on their original assessment (via Buzz Brockway who has written the Carter Institute asking when the former President might comment on the post-election turmoil in Ethiopia). This is what Buzz found on the Carter Center website posted on June 3rd on the Ethiopia elections:

“Ethiopia stands at a critical juncture where the tremendous strides toward democracy made this year either may be seized upon and institutionalized or wasted. We call upon all concerned-the contending parties, media, civil society organizations, and the international community-to support the NEB in bringing this historic election to a fitting conclusion. Where inevitable disputes arise, we call for their peaceful resolution through appropriate legal channels.”

So, if Jimmy Carter by his June 3rd memo is not backpedaling on his original assessment of the Ethiopian elections, then what was that original press conference all about in the first place?

Why did he announce that the national elections had a “successful completion” if it is policy of the Carter Center to include the “pre-election period, polling day, and the post-election period”, before making a final assessment?

With the hopes of 76 million people in a country that has not witnessed democratic ele
ctions in 3,000 years quickly fading…

With the clampdown and harassment of foreign journalists…

Lets hope that the Carter Center will look at its own processes and systems before it goes out to rubberstamp the next election process of a hopeful and subjugated population.

Update: (Thursday) Buzz Brockway has contacted the State Department to hear what they are saying about the crisis in Ethiopia and Congressman Smith (R-NJ) has called on the Ethiopian Government to cease and desist their violent response.
Lorie Byrd at Polipundit is wondering how this could happen to Jimmy.
Will Franklin at WILLisms had wondered about “The Jimmy Factor” back on May 15th.

Jim Hoft
DISTURBING VIDEO: Woman Goes Through Store's Displayed Computers and Touches Each One and Its Keyboard - Is Confronted by Customer
UN Wants a 10% Global Tax to Pay for New "Shared Responsibility" Program to Address Coronavirus Pandemic
HUGE! Infectious Disease Expert Says His Clinic Has Not Seen ANYONE UNDER 70 Who was not Obese or Pre-Diabetic Get Seriously Ill with COVID-19 (VIDEO)
Dr. Fauci Says His Immunity Testing is Not His Priority -- Would Help Leaders Know When to Restart Economy (VIDEO)
Heartland Trailways Writes Gateway Pundit -- Family Owned Charter Bus Lines Are Being Decimated by Economic Shutdown
See more...