And, they refused to pay the cover charge! 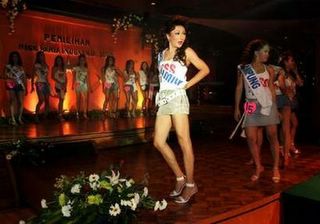 The contestant representing Aceh Province fell in the rankings after her number was rudely interrupted.

After barging in during the swimsuit competition of an Indonesian Drag Contest, it was discovered that the clerics may have more in their motive than ridding Indonesia of big hair and feather costumes:

Islamic hard-liners barged in on Indonesia’s transvestite beauty pageant, panicking its skimpily dressed contestants but failing to stop the show the second year running that the world’s most populous Muslim nation has staged such an event.

After 20 minutes of tense negotiations, the show continued, though organizers agreed to finish early in deference to the group, which has a history of vandalizing entertainment centers it considers un-Islamic.

“We were all traumatized. They said we were immoral, but God created us this way,” show organizer Megi Megawati said in a telephone interview Monday. “I am a Muslim too, but I respect other people. Why can’t they?”

The Islamic Defenders Front was formed in 2000 and campaigns for the imposition of Islamic Shariah law. Despite its overt displays of piousness, many analysts say that the group’s primary motive is extorting money from frightened bar owners not Islamic principles. 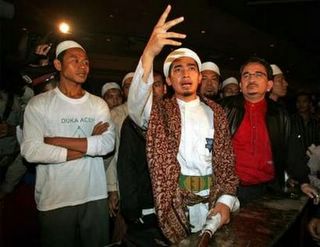 This Islamic Hardliner refused to tip the contestants.

Known as “waria” a combination of the Indonesian words for man and women they regularly appear as hosts on television entertainment shows.

But discrimination is rife, said Megawati, and many waria turn to prostitution.

“Animals are treated better,” he said. “We tried to do this event to show that we are regular people and look what happened.”

The winner of Sunday’s show a 20-year-old public relations worker called Olivia won the equivalent of US$250 (Â€206) and a return air ticket to Bangkok, Thailand, where he will compete in an international transvestite pageant next year.