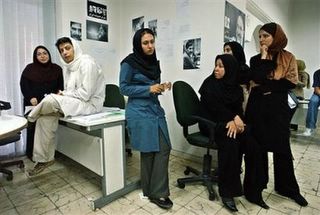 Female journalists from a reformist newspaper in Iran look dejected after being told on Monday that their paper has been banned by the government. The paper was banned after it threatened to publish charges that conservatives and the military were rigging the elections. (AP Photo)

Iran wants Bush to apologize for saying that their sham elections were not legitimate. Iran and many Western media outlets, who have been covering the Iran election as if it were democratic, also believe that Bush’s comments backfired since there was such a “high voter turnout”:

On Sunday, US Secretary of State Condoleezza Rice, who is in the region, also said the poll had failed to be a legitimate exercise in democracy.

On Saturday, President Bush denounced the election as a sham.

He said the polls ignored “basic democratic standards” and was a further example of what he called the regime’s “oppressive record”.

Mr Kharrazi said Americans should “wake up from their sleep and correct their position towards Iran and apologise”.

But he said Mr Bush’s remarks motivated people to vote.

“Bush’s statement helped those people who did not want to vote to come forward to vote,” he said, adding the US would be “disgraced by the big participation”.

Officials said about 62% of the electorate cast their ballot.

You have got to love Condi’s response, which get at the heart of the matter… 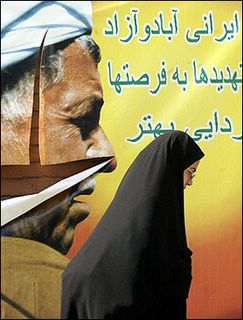 An Irani woman walks past a poster of the “moderate” Akbar “Let’s nuke Israel” Hashemi Rafsanjani in Tehran.

Many Western news outlets are covering the election with great detail.

Reuters is concerned about voter manipulation being a threat:

The Interior Minsister did admit vote rigging to some degree in the first round of voting.

The current president is backing Rafsanjani.

Iran’s Hardline Mullah Leader Ayatollah Ali Khamenei said “he would not allow anyone to create a crisis”.

Robert Mayer at Publius Pundit is following the election closely. Will Franklin at WILLism’s has a great posting on the Houston polling station.

Hossein Derakhshan, Hoder from Editor Myself is in Iran and following all of the election noise up close.