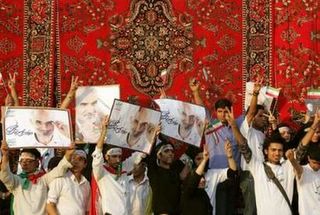 Youth supporters of Iranian Reformist Candidate Mostafa Moin attend a rally in Tehran. Moin’s main supporters are young people but many of them have lost hope in democratic reforms under Khatami and find it difficult to trust that Moin will be able to accomplish what they want. (AP)

Iran has admitted to experimenting with producing plutonium, which can be used for atomic bombs, much more recently than it originally told the U.N. nuclear watchdog, according to a draft U.N. speech.

Iran had first told the International Atomic Energy Agency (IAEA) that its last experiments with the reprocessing of plutonium took place in 1993 but revised that date to 1998, according to a draft speech deputy IAEA chief Pierre Goldschmidt is due to make to the agency’s board of governors on Thursday.

The speech, obtained by Reuters, said the IAEA had asked Iran to confirm that one bottle of a solution containing plutonium “had been processed in 1995 while the solution in the second one had been purified in 1998.”

“In a letter dated May 26 2005, Iran confirmed the agency’s understanding with regard to that chronology,” the speech said.

This revelation will likely add fuel to Washington’s belief that Iran’s nuclear energy program is a cover to develop the bomb. Iran denies the accusation, insisting its nuclear ambitions are limited to the peaceful generation of electricity. 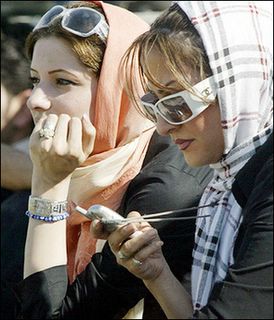 Iranian women relax and call friends from a park in Tehran two days before the presidential elections on Friday. The candidates will be vying for the youth vote. A majority of the voters are under 30 years of age.

Meanwhile on Wednesday hundreds of Kurdish Iranians were excited about their candidate. The one in Kurdistan! The Kurds in Iran rioted in celebration of the former rebel leader Barzani who was sworn in as the first president of Iraqi Kurdistan:

Hundreds of Iranian Kurds have clashed violently with police in the northwestern Iranian town of Mahabad, an historical centre of Kurdish nationalism, according to Iran’s State News Agency (IRNA).

The rioting, which came just days before Iran is due to elect a new president, was sparked by news from across the border in Iraq that former rebel leader Massoud Barzani was sworn in as the first president of Iraqi Kurdistan.

IRNA said a number of vehicles and shopfronts were damaged “when a group of excited people” — numbering around 300 — took to the streets of the town “on the pretext of joy because Massoud Barzani got elected”.

More on Kurdistan here and here.

And, President Bush today spoke out against the Irani elections scheduled for Friday:

Today, Iran is ruled by men who suppress liberty at home and spread terror across the world. Power is in the hands of an unelected few who have retained power through an electoral process that ignores the basic requirements of democracy,” Bush said in a statement released by the White House.

Unfortunately, international media continue to treat this sham election seriously, writing breathlessly about how close it will be, how hotly it is contested, and pretending there is a difference between the “reformers” and “conservatives” who are running.

Let us not get too carried away with the range of choices being given the Iranian people. As our columnist, Amir Taheri, explains on these pages, “All the candidates are government employees with decades-long records of military and civil service within the regime. Five of them are active or reserve officers of the Islamic Revolutionary Guard. All eight describe themselves as members of the Iranian branch of Hizbullah and trace their ideological ancestry to the late Ayatollah Ruhollah Khomeini.”