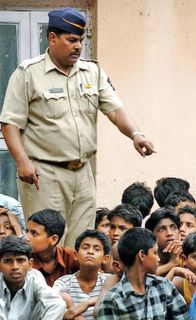 A government official counts childred rescued in Mumbai. The city police in a raid freed a total of 446 child labourers from chawls (small dwellings) many of whom were employed in small scale industrial outfits spread across Mumbai city in zari (textile handwork), jewellery and leather product outfits.

72 more minors were rescued in Mumbai on Friday:

In an operation undertaken by the state labour department in the metropolis, 72 minors were rescued on Friday from various small-scale units.

He said four owners of the units employing minors were also taken into custody and handed over to police.

Some owners managed to escape from their units and the police have been asked to search for them, Jagtap said.

Police had recently rescued 446 minors from various zari units in the city.