HUNDREDS OF YOUTH RIOT AND ROB ON A BEACH IN PORTUGAL, VIDEO HERE 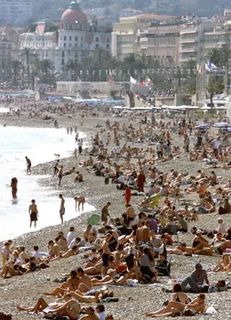 Earlier today the BBC reported on rioting youth on a beach in Portugal:

Some 500 youths, mainly teenagers, have raided a popular beach near Lisbon spreading panic among beachgoers and mugging a large number of people.
Carcavelos beach, 15km (10 miles) west of the Portuguese capital, was crowded on Friday because the country was celebrating a national holiday.

Policemen in riot gear were confronted by gangs and struggled to restore calm, making four arrests.

The attackers are believed to come from some of the capital’s poorest suburbs.

A small number of police officers from the nearby town of Cascais initially tried to disperse the mob, but were forced to call reinforcements because the gangs were refusing to leave the beach.

The Australian also reported on the beach riots:

“Small groups of youngsters aged 12 to 20 assembled and robbed en masse those they found on the beach,” said local cafe owner Helder Gabriel, who closed down his establishment for fear of attack.

According to the mayor’s office of neighbouring Cascais, the aggressors came from poor suburbs of Lisbon.

Reuters also reported on the story:

Police in riot gear were called in to quell the disturbance. Four people were arrested and two officers were injured, police said.

Gang assaults on bathers are rare in Portugal, which enjoys relatively low crime.