The largest terrorist WMD trial in history is opening in Jordan. 13 Al-Qaida and Al-Zarqawi loyalists are being tried for an attempted and nearly succcessful catastrophic chemical weapons attack on Jordan.

Developments:
* Defendents throw shoes in court!
* Defendents chant “Allahu akbar” for over a half an hour to disrupt the court
* Defendent, Al-Jayouzi threatens tribunal with “Abu-Musab al-Zarqawi will chop off your heads and stuff it up your mouths!”
* The terrorists communicated with “secret ink”!

“Abu-Musab al-Zarqawi will chop off your heads and stuff it up your mouths, you God’s enemies!” Al-Jayouzi threatened during initital proceedings in May. 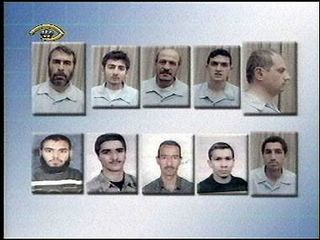 Ten of the captured Al-Qaida terrorists on trial in Jordan for attempting to explode roughly 20 tons of chemical weapons with explosives. Authorities captured the weapons coming into Jordan through Syria.

The most dangerous terrorist plot ever foiled and brought to trial is being prosecuted right now in Jorddan. Al-Jayouzi, a follower of Al-Zarqawi, is on trial for planning and attempting to execute a Chemical Weapons attack in Jordan that could have killed as many as 80,000 civilians:

Northeast Intelligence Reports more on the crime, capture and trial:

* The defendents roared “Abu-Musab al-Zarqawi will chop off your heads and stuff it up your mouths, you God’s enemies,” *

A total of thirteen terrorists, four who are being tried in absentia including Iraqi thug Abu-Musab al-Zarqawi, are on trial for plotting chemical and conventional attacks against government and public buildings in Jordan and elsewhere under the command of al Zarqawi. The Jordanian plot was uncovered and ultimately foiled on April 21, 2004, when the four alleged cell members were killed in a shoot-out with police. From that incident, additional evidence was collected and other cell members arrested, and are now on trial.

In a page from al Qaeda’s playbook, on Wednesday, May 4, 2005, prime suspect Azmi al-Jayousi disrupted the trial by throwing his shoes at military judges during the hearing in Amman, and threatening them with death. He did so to protest the killing of his four co-conspirators in a gun battle with police when the plot was thwarted last year. During the testimony of a medical doctor describing the wounds of the co-conspirators, al-Jayousi took off his slippers and hurled them at the chief judge, Colonel Fawaz Buqour, while shouting “Abu-Musab al-Zarqawi will chop off your heads and stuff it up your mouths, you God’s enemies,” pointing his finger at the three-man tribunal.

Another defendant, Ahmad Samir, shouted “The blood of our brothers will not go wasted.” “Await death, Obeidat, for you are God’s enemy,” he roared, addressing the military prosecutor, Lt. Col. Mahmoud Obeidat.

During continued proceedings last week (in May), the defendants continues to show their contempt for judicial law by shouting “Allahu akbar” – “God is great” – in Arabic and by chanting other verses from the Qu’ran continuously for half an hour on Tuesday, May 10, 2005. The nine, lead by Azmi al-Jayousi, recited verses for around 30 minutes. “Our Sheik Abu-Musab, all your blood is not sufficient for him,” they chanted, referring to those present in the court.

Although the defendants could be punished for their actions by up to three additional years of jail, chief judge Buqour ordered al-Jayousi and two other defendants out of the courtroom in an effort to restore order. When he failed and the defendants became more disruptive, he adjourned the hearing to an unspecified date.

* In one testimony it was discovered that the Al-Zarqawi members communicate with secret ink! *

Also During the trial, an expert in the computer affairs stated that the group possessed CDs that included training courses on how to deal with explosives and poisons.

Last year, the primary terrorist defendant al-Jayousi admitted in televised confessions that his group had plotted a chemical attack in Jordan under direct instructions from al-Zarqawi, the al Qaeda thug responsible for scores of bombings, kidnappings and beheadings of foreigners in Iraq. 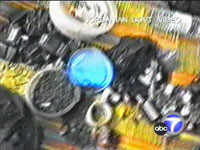 Al-Jayousi said he received about $170,000 from al-Zarqawi to finance the plot and used part of it to buy 20 tons of chemicals. He did not identify the chemicals, but said they “were enough for all the operations in the Jordanian arena.”

Images of what the commentator said were vans filled with blue jugs of chemical explosives were included in the broadcast.

Hussein, the car mechanic, said he met al-Jayousi in 1999 but did not clearly say when the terror plans were laid out.

The bearded Hussein, looking anxious, said al-Jayousi told him the aim was “carrying out the first suicide attack to be launched by Al Qaeda using chemicals” and “striking at Jordan, its Hashemite (royal family) and launching war on the Crusaders and nonbelievers.

So what else is astounding about this case?

The chemicals are believed to be VX nerve gas. There was 20 tons of the weapons and explosives captured coming into Jordan from Syria. Syria doesn’t make VX. Saddam Hussein’s Iraq did.

Al-Qaida Terrorist Az
mi Al-Jayouzi is currently on trial in Jordan. During testimony last month Al-Jayouzi threw his shoes at prosecutors when the death of his comrades during a fire fight was discussed. He was captured during the fighting along with a truck load of chemical weapons.

Al-Jayouzi made demands of the court in the first hearing last year:

“I and the other defendants don’t want to speak to you until you heed our demands to permit our families to visit us and allow us to join the cellblocks of political prisoners,” al-Jayousi told Colonel Fawaz Buqour, president of the State Security Court.

“Go to hell!,” al-Jayousi shouted, sporting a beard and standing in the dock with the eight other defendants, most of them in dark blue prison uniforms and chained at the ankle.

Charles Johnson of Little Green Footballs may have been the first to pick up on the story last year with his “Car Bombs Found in Jordan Post” post followed by his “Jordan was Chemical Bomb Target” posting.

And, here is a previous post on the “Jordan Al-Qaida WMD Story” here.

Update: Both Little Green Footballs and Powerline are again on the story this morning.